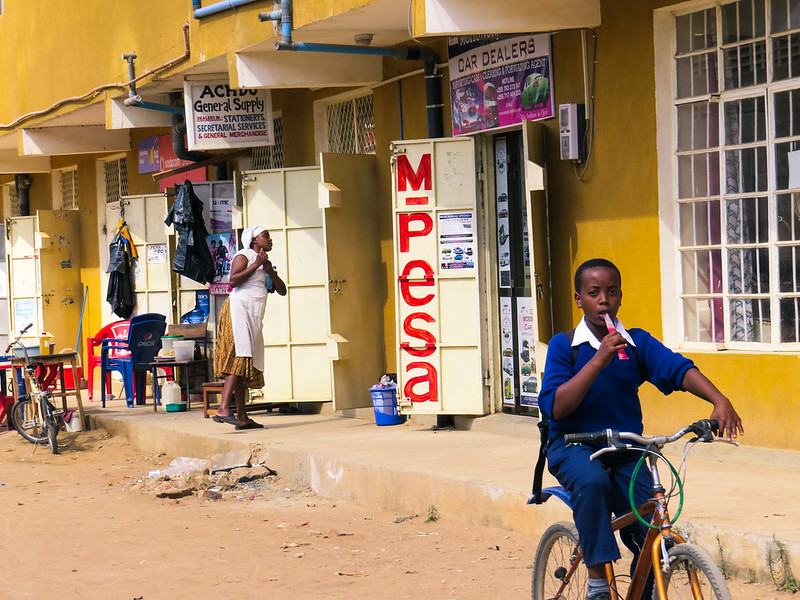 Experts argue that expanding access to financial systems and services are an indispensable component of reducing poverty. However, Kenya offers only limited access to banking services outside of central cities. Fixed-line telephones are largely unavailable, and minimum fees for banking services pose an impediment to the rural poor and can deter use. Due to these facts, many rural and poor Kenyan households traditionally lacked access to proper finance-management resources. However, mobile money transfer service, M-Pesa, now provides Kenyans with an alternative to traditional banking. Mobile money reduces poverty in Kenya by creating a simple and accessible resource for individuals and families to manage their finances. In under a decade, the expansion of M-Pesa’s simple SMS-based system changed household finance so drastically that nearly 200,000 Kenyans—around 2% of the population—were able to break out of poverty.

M-Pesa allows individuals to send and receive payments via text, as well as deposit and withdraw cash from M-Pesa agents stationed in villages. With 110,000 agents located throughout the country, M-Pesa helps Keynan households overcome the country’s lack of accessible financial services. Now, there are 40 times more M-Pesa agents stationed throughout Kenya than ATMs. Users can easily and inexpensively store savings by depositing cash into their mobile phones via M-Pesa agents. Increased access to savings helps Kenyan households weather unexpected economic hurdles. One study found that following a financial shock, the per-capita spending of households using M-Pesa was 12% higher than households that didn’t use M-Pesa. The discrepancy is likely due to the increased saving capabilities of M-Pesa users.

Long-Term Implications for Poverty in Kenya

An MIT study in 2016 examined the long-term effects of using M-Pesa’s service. They found that between the years 2008-2016, per capita consumption of goods increased by approximately 18.5%. The mean of the households in the study spent $2.50 per day, which is well above the $1.25 or even the $2.00 per day that constitutes extreme and general poverty. According to the study, M-Pesa directly helped as many as 194,000 Kenyan households escape poverty between 2008 and 2016.

Additionally, the MIT study found that M-Pesa helps Kenyan households run by women in particular. Between 2008 and 2016, the savings of women-headed households using M-Pesa grew by 22% compared to those who did not. Furthermore, nearly 185,000 Kenyan women using M-Pesa could switch from subsistence farming to more economically productive activities, such as sales or business. This economic freedom came regardless of whether their home had a female or male head. For households with two incomes, M-Pesa gives women the ability to store savings, allowing Kenyan women to gain newfound financial independence and opportunity for their own economic pursuits.

Since MIT’s 2016 study, M-Pesa has increased the number of Kenyans with access to formal financial services from 75% to 83% in 2019. Along with personal banking, M-Pesa helps Kenyan households with a wide array of financial services. These include taking out loans, actively managing savings and collaborating with local banks. With the introduction of M-Pesa, the number of bank accounts held by Kenyans grew from 14% in 2007 to 41% by 2019. Largely due to this mobile money service, Kenya is now ranked third in the continent in citizen access to financial service, behind only South Africa and Seychelles. Researchers hope that M-Pesa’s success in Kenya will encourage further study of how mobile money reduces poverty in other countries.