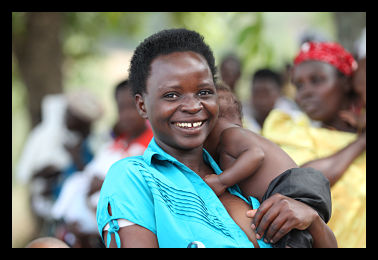 Merck for Mothers is a 10-year, $500 million initiative that envisions, and works toward, a world where no woman dies giving life. Currently, an estimated 800 women die per day, primarily in developing nations. Merck’s global mission is to bring better healthcare and innovative health solutions to millions of people across the developing world; a commitment that has been in standing for more than 150 years. Working closely with its program leadership, advisory board, healthcare workers, maternal health experts and policy makers, the Merck for Mothers initiative has already served in more than 30 countries across the world.

As stated on its website, “Women are the cornerstone of a healthy and prosperous world. When a mother survives pregnancy and childbirth, her family, community, and nation thrive.”

Merck for Mothers aims to see nations thrive by saving as many lives as possible, and it does this by tackling the two leading causes of maternal mortality: excessive bleeding after labor and high blood pressure disorders during pregnancy and childbirth.

For example, in Uganda, where a woman faces a one in 49 chance of dying during pregnancy and childbirth, many of the private healthcare providers, such as independent midwives and local pharmacies, offer services that are not always regulated and can vary in quality. As a result, Merck for Mothers explores the ability of these local private providers and health businesses to deliver affordable and high-quality maternal healthcare. This is a program that has estimated to reach more than 150 thousand pregnant women over the span of three years.

Each of the 30 country programs is different and tailored to that country, yet they all strive for the same goal: giving mothers a better chance at surviving pregnancy and childbirth. In addition, Merck for Mothers focuses on family planning, which is known to play a key role in reducing maternal mortality. Merck for Mothers explains this through the Ripple Effect. When a mother dies, the ripple effect begins with her child who is more likely to die before the age of two. If she has other children, they are also up to 10 times more likely to leave school and suffer from poor health. But a mother’s death affects more than just her family.

Merck for Mothers believes that a woman’s death also impairs her community. Representing as much as one-third of the world’s gross national product, a woman’s unpaid work contributes to a community’s economic prosperity. In the end, this becomes a global economic issue. For these reasons, Merck for Mothers focuses on three key areas: innovation, access and advocacy.

At Merck, corporate responsibility is the cornerstone of its daily commitment to tackle global health challenges, such as river blindness, HIV/AIDS and cervical cancer. It has been a 150-year commitment, but that has not stopped Merck from making new additions.

With Merck for Mothers, it can now expand its scope and save the lives of millions of mothers across the globe, so that every day 800 more lives of women are spared.