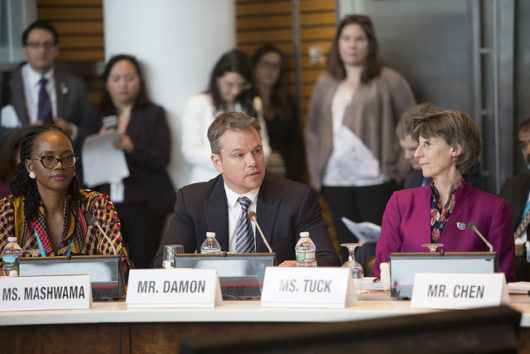 Matt Damon is an academy award winning actor, screenwriter, producer and humanitarian. Inspired by his trips to Mexico and Guatemala as a youth, Matt has been devoted to ending the struggle for basic human needs. He learned about the immense challenges of accessing and retrieving clean water and sanitation in sub-Saharan Africa and this inspired him to create the H20 Africa Foundation.

The Foundation of WASH Program

Later on, he teamed up with Gary White to merge into one foundation and launched the WASH program with the official website water.org. The WASH is an abbreviation from Water, Sanitation and Hygiene. Matt Damon works with the WASH program by doing active organization work. He visits multiple countries to strategize on how to improve water condition and meets with high-level organizations like the World Economic Forum and the World Bank. This hands-on activity has positioned him as one of the world’s experts on water and sanitation issues.

Matt Damon knows water is a basic human need. In many areas around the world, women and children walk miles on a daily basis to the nearest source of clean water for cooking, drinking and bathing. Having to go so far for water every day takes people away from education and their families and Matt believes this robs people of their potential. As Matt says it himself: “Access to clean water is access to education, access to work, access-above all- to the kind of future we want for our own families, and all the member of the human family.”

The Effects of Water Crisis

The water crisis around the globe has been an ongoing battle for many countries. More people die from unsafe water than from any form of violence, due to the waterborne diseases. These diseases kill more children than malaria, measles and HIV/AIDS combined. Over 100 million families are in a constant cycle of disease and lack of opportunities to improve lifestyle. One in three families lacks access to a clean toilet, increasing the chance of disease. With the journey to get decent water being so long, 443 million school days are wasted, just because families do not have clean water. Time spent gathering water also affects the economy as well as nearly $24 billion is lost annually. Even with these setbacks, every dollar donated to improve clean water and sanitation increases economic activity by eight dollars.

The Work of WASH Program

For more than 25 years, Matt Damon has been working closely with the WASH program to bring clean, accessible water to people in poverty around the world. With the WASH program, safe water has the power to turn problems into potential. The potential for health, education and economic prosperity lie in the power of clean water and sanitation. Gary and co-founder Matt are out there making this happen. So far, they have brought clean water and sanitation stations to over 16 million people. Charity alone is not a permanent or not even long-term solution. Through government and economic outreach, they can raise money with percentages from products sold and government funding. Another way the organization is tackling the ongoing water crisis is with its own type of credit called water credit. Water credits are small loans families can apply for in order to have proper sanitation systems built. The payback on these loans has been high, with a 97 to 99 percent payback rate.

In an attempt to reach out to the masses of people, Matt Damon took the WASH program and put it in a Super Bowl ad. The ad states that, although the water is available at the turn of the knob, for roughly two billion people around the world, water is difficult to access. This includes 750 million people in sub-Saharan Africa and 63 million people in India that lack access to clean water. For example, conflict in Yemen has completely cut off the supply for clean water. At least half a million of those people are infected by waterborne diarrheal diseases. To take action, Matt urges governments and businesses to invest in clean water and toilets. The commercial promotes the sale for Stella glasses. This company has dedicated a portion of 300,000 sales that will go towards water projects correlated with the WASH program. Getting clean water to people globally will require donations, but most importantly companies that will invest in this program.

With millions of people affected by the water crisis, there is no one size fits all solution. Matt Damon and the WASH program are using their influence and are utilizing all their resources to bring people water, a basic survival need, straight to their homes.