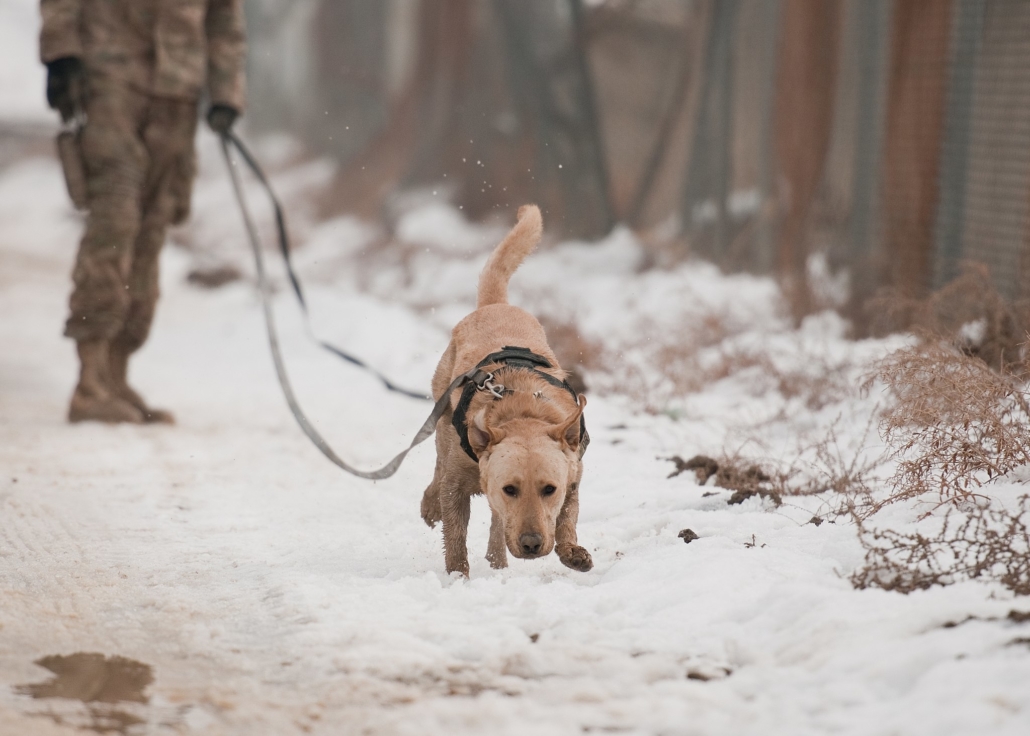 Countries recovering from war face countless challenges, including their land being contaminated by landmines. Landmines hidden underneath the ground can be active up to 50 years and only take a small amount of pressure to set off. Around the world, landmines kill or injure someone every 40 minutes. The Marshall Legacy Institute is employing dogs to de-activate landmines around the world to help societies move forward from war.

Landmines hinder economic development, as well as the health and safety of populations in post-crisis places. In particular, landmines threaten rural populations. Unlike urban areas, the dangers of landmines deter the building of infrastructure in rural areas. This also prevents the emergence of new opportunities to stimulate the local economy. Landmines also stop agriculture production, resulting in food insecurity.

Every day, landmines kill 12 people globally and threaten the livelihoods of citizens already trying to recover from war. People walking to work, to school or even on their own land may be injured or killed when they step on an unmarked landmine. Those in war-torn countries who become injured by explosions have a harder time escaping poverty than ever before. This is particularly devastating because half of landmine deaths are children. In this situation, hospitals are vital to providing surgeries, rehabilitation and psychological help to victims. Unfortunately, most hospitals that treat landmine injuries are in the cities, while a majority of these accidents affect rural areas. Not receiving help has a lifelong impact on a person’s health, and they face social discrimination and physical challenges when finding work.

Landmines also pose challenges to aid organizations. Refugees are more likely to return home if the land is mine-free and safe. However, aid groups working to assist populations only help safe places and cannot help these rural places in need. Aid groups that do travel to contaminated areas risk their life, as evidenced by the two polio workers who were killed by a landmine blast in Pakistan.

The Marshall Legacy Institute and Mine Dogs

The Mine Dog Protection Partnership Program uses 900 dogs to sniff out and identify landmines in 24 countries. Most landmines contain barely any metal pieces, which makes them challenging to detect. While human de-miners use metal detectors during searches, dogs can smell both plastic and metal to discover landmines. This strong sense of smell allows these explosive-sniffing dogs to search the land 30 times faster than manual teams.

The program trains dogs for three to five to months. They are motivated to find mines through rewards like toys. Donations from people and companies sponsor the dogs, and organizations care for them during their working lives. None of the Marshall Legacy Institute’s dogs have been hurt during a clearance operation. So far, the Mine Dog Protection Partnership has cleared 49 million square meters of contaminated land.

A Future Without Landmines

To promote safety and development in Bosnia-Herzegovina, the Marshall Legacy Initiative created the “Mine Free Sarajevo Project.” In this project, the Mine Dog Protection Partnership Program aims to clear 8 million square meters of landmines in the country. It has already cleared 14,000 square meters of land, which can now be developed into tourist sites and sports facilities. In short, the “Mine Free Sarajevo Project” can help Sarajevo and surrounding regions to finally become mine free.

The Marshall Legacy Institute is currently aiding countries with an immediate call for assistance such as Yemen and Colombia. The Marshall Legacy Institute’s Development Director, Indre Sabaliunaite, shares that “The Marshall Legacy Institute aims to free war-torn and post-conflict countries of landmines. Mine-free land improves the livelihoods of so many people by expanding their financial opportunities and by ensuring that no more children, women, or men will get injured or killed. MLI’s mission is to help countries help themselves. Once the organization removes landmines and other explosives, it returns the land back to the people. This has allowed communities to employ the land for farming, economic development, tourism purposes, and housing development.” By continuing to free land with the help of mine dogs, people can advance from the challenges of war and start their new lives.

Tourism and COVID-19: The Pandemic’s Impact on 3 Tourist CountriesHow to Fight Pandemic-Induced Inequality in Latin America
Scroll to top