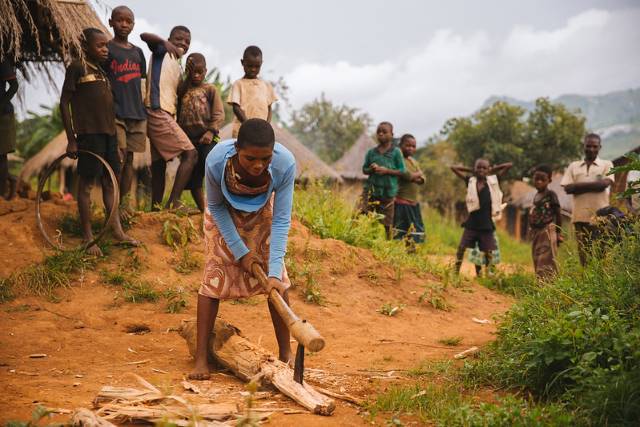 As a small, landlocked country in East Africa, Malawi relies mainly on agriculture for its economic stability and subsistence. In 2011, agriculture formed 31% of Malawi’s GDP and employed more than 80% of the workforce. Despite the bountiful resources that agriculture offers the people of Malawi, food insecurity is still a very present reality for a significant portion of the population. Farmers in rural villages struggle to attain the income needed to survive. To compound this issue, Malawian farmers heavily divide agricultural and domestic labor along gender lines, placing the brunt of domestic and farming burdens upon the shoulders of women. However, thanks to the efforts of researchers and global activists, educational programs have proven effective in getting Malawian men involved in the process of feeding the family, leading to increased gender equality within the household.

Although Malawi has been on a steady upward trend toward increased childhood education and greater access to healthcare, half of the overall population suffers from poverty due to negative factors such as droughts, floods and lack of sustainable farming methods. A majority of Malawian farmers can produce only enough food to survive and cannot grow the extra crops needed for future food supplies or trading opportunities. Thus, rural communities often live from harvest to harvest without a stable supply of fresh food and produce.

The Role of Women in Malawian Agriculture

Within the small rural communities of Malawi, societal norms divide the household responsibilities along gender lines, with the men of the household taking charge in plowing the fields, tending to crops and performing other farming duties. In addition to taking on agricultural tasks, women within the community complete household chores and watch over the children. Although the amount of female participation in Malawian farming practices is commendable compared to other small countries with similar economic conditions and demographics, the farming system is strenuous on women, who must perform double duties to ensure that the household runs smoothly.

With the economic fragility of Malawi, patriarchal structures have proven detrimental to the well-being and security of the community. It is difficult for Malawian female farmworkers to reach their full production potential and devote their full energy to sustainable farming practices and education. Families cannot produce enough food to sustain themselves and others in the village due to unequal task divisions.

A team of researchers recently undertook an experimental project to subvert the rigor of gender roles in Malawi and take some of the economic pressure off of Malawian women, often affected the most by poverty. One practice that researchers implemented to dismantle gender roles is to change the public perception of cooking and food practices in Malawi. Due to the reliance on starchy grains and roots that must be cooked in the Malawian diet, processing and cooking foods take up most Malawian women’s time. Seeing this phenomenon, researchers developed cooking tutorials to educate men on how to cook and also converted cooking into a fun activity by proposing it as a kind of competition in which different villages could contest who had the best male chefs.

As Raj Patel recounts in his lecture on transparency in the food system, although the social experiment that researchers conducted in Malawi initially seemed like a trivial novelty, its impact carried through into the daily lives of Malawian farmers. This small change in daily habits encouraged the men to shoulder more domestic tasks and act beyond the scope of traditional gender norms. In the short four-year period that researchers observed, Malawian malnutrition decreased and the women surveyed reported feeling more fulfilled and supported in their homes. Although there is still far to go in destabilizing the patriarchal structures present in Malawian society, small steps in the food system are the key to achieving bigger milestones such as reducing poverty and promoting gender equality.