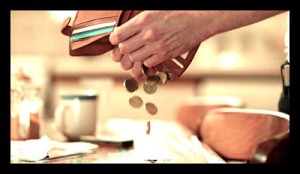 In an effort to help people understand what it means to live below the line of poverty, the Global Poverty Project organizes an annual campaign to raise funds and awareness for the 1.4 million people living in poverty around the globe. While the campaign strives to gain funding, it is also dedicated to helping people understand what a life of poverty means. Participants live for five days on the equivalent of about $1.50 USD. Since the beginning of this year, 20,000 individuals have taken the challenge alongside the GPP and a dozen partnered nonprofit organizations across three continents. This year the campaign took place from April 29 to May 3 in Canada, The United Kingdom, Australia, New Zealand, and The United States. However, the GPP is taking donations till May 31 and the challenge is open to anyone that wants to do it year-round.

In the United Kingdom, living below the line means living on £1 for five days. One couple, Jenna and Stuart Wills, fine dining enthusiasts, share their experience on living below the line. In a country where one pound, approximately $1.50 USD, doesn’t even buy a bus ticket, a sandwich, or elderberry cordial, the couple knew it was going to be rough.

At the beginning of the week, the couple decided to buy the cheapest staple foods they could find, rice and noodles but realized that they had spent more than half of their five days budget. Consequently, it was difficult to spread the remainder of the budget over the rest of the week. The organic, fair-trade and costly foods that the Wills’ usually dined on were set aside and bargain buys that weren’t quite as delectable were their only alternative. The couple learned to plan grocery-shopping trips to stores and markets close to closing time in order to buy foods that were to expire soon and slashed in price. As the days wore on, lack of luxury food items as simple as coffee took a toll on the couple in high tempers and mood swings.

While the challenge was difficult at times, the couple admits that what they endured for five days is nothing compared to true poverty. They recognize that they have never once wondered when they would eat next, they bragged about their bargain finds on Facebook, and went about their daily lives. Whenever they felt a bit hungry, they had the option to put another piece of bread in the toaster. The couple raised £435 for their chosen charity, Oxfam, and have taken the challenge as an opportunity to appreciate what they have and spread the word about extreme poverty around the world.

Africa: Working to End Hunger Internally How Tax Havens Are Hurting Those In Poverty
Scroll to top