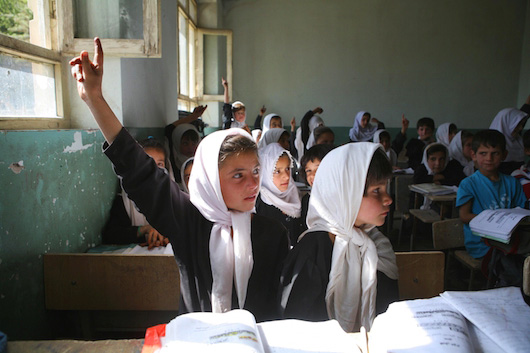 Nutrition and Education International (NEI) is aiding the Afghanistan government in carrying out nutrition programs that aim to improve literacy in Afghanistan.

A third of Afghanistan’s population falls short of daily calorie needs, with 20 percent of the population lacking enough protein in their diet and 40 percent of children ‘stunted,’ or small for their age.

“A malnourished mother has a higher risk of delivering a fetus that is malnourished, small for its gestational age, and sometimes even premature,” explained child-health expert Zulfiqar Bhutta. “By virtue of this handicap, these babies often have issues with lifelong learning.”

To tackle the issue of food security in Afghanistan, NEI has been working with local governments and the United Nations World Food Programme (WFP) to encourage the farming of soybeans.

Soybean was selected because it contains high-quality protein, zinc, iron and plenty of calories. In a country recovering from a war, cultivating soybeans is the most economical option.

NEI program has also provided employment and education for Afghans. NEI has trained over 70,000 farmers on cultivating soybeans and how to turn them into flour and milk.

Soybean is not a traditional part of the Afghan diet or landscape and the endeavor was initially met with criticisms, but with government support and local trainers that teach villagers about the benefits of soy, the program has expanded.

In 2014, the Republic of Korea contributed $12 million to the WFP to build Afghanistan’s first soy milk factory. The leftover soybean pulp will be distributed to local women as chicken feed in order to encourage them to raise poultry and generate income.

NEI aims to eliminate protein malnutrition all over Afghanistan by aid farmers in producing 300,000 metric tons of soybeans, which in turn will provide growing children with more protein in their diets, which then has a direct effect on increasing literacy in Africa.