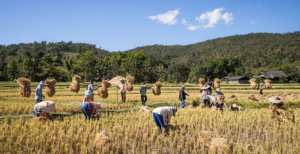 More than half of the world’s poorest live on farms in rural areas of developing nations. This accounts for 2 billion people that depend on small-scale agriculture for their livelihood, according to the International Fund for Agricultural Development. There are challenges for rural farmers in low-income countries. A team of graduates from the Massachusetts Institute of Technology (MIT) developed a mobile app that lifts rural farmers out of poverty.

Challenges facing rural farmers in developing nations extend beyond the vagaries of nature, though those are certainly impactful. First, without access to affordable credit, farmers cannot secure bank loans and instead rely on informal lenders who charge exorbitant rates. Second, after receiving the necessary capital, rural farmers often lack vital information that would help them plant and tend crops, such as optimal nutrient application and weather forecasts. Lastly, after harvest, during the small window of time farmers have to sell crops before spoilage, they often lack access to direct buyers. This once again forces farmers to go through the same intermediaries who gave them the loan. Dependence on exploitative intermediaries and lack of information often trap rural farmers in developing countries in a cycle of poverty.

A Mobile App that Lifts Rural Farmers Out of Poverty

A graduate team from MIT is using technology to transform agriculture and the fight against poverty. In 2014, the group launched a startup called Ricult, a mobile app that lifts rural farmers out of poverty. Farmers can use Ricult to secure affordable credit, access inputs such as seeds and fertilizer, monitor weather forecasts and connect directly with end-buyers. In addition, the app helps farmers maximize their crop yield by providing personalized advice based on soil tests.

Ricult launched in Kasur, Pakistan in 2016. To reach the farmers, the company organized skills workshops that amassed between 400 and 500 participants. The sales team is part of the farmers’ community, and agents meet regularly with users to offer advice and improve the experience.

By August 2017, Ricult had provided farmers in Pakistan with over $77,000 worth of farm inputs to more than 150 farmers on credit. Prior to that, farmers paid between four and five times more to loan sharks. That same year, Ricult expanded to Thailand.

Ricult had more than 40,000 downloads as of April 2019. Its services have boosted farmers’ crop yields by an average of 50 percent. Meanwhile, the farmers’ profits have risen between 30 and 40 percent. Ricult currently offers its services to farmers across Thailand. Additionally, the company hopes to expand to Cambodia, Myanmar and Sri Lanka in 2020.

The founders of the app have received with the 2017 United Nations’ Innovative Ideas and Technology on Agribusiness award. In addition, the Royal Thai Government named Ricult the best Agricultural Tech in Thailand. Also, it got the best Social Enterprise in Southeast Asia and Oceania in the Global Social Venture Competition and won the Fintech Disrupt Challenge which the Gates Foundation organized.