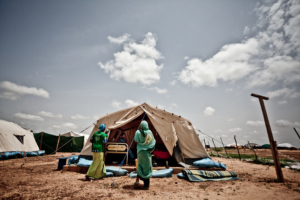 The number of people thrown into life as a refugee has increased from 21.3 million people in 2015 to 26.4 million refugees in 2020. While there is no current worldwide count for 2021, the Taliban takeover in Afghanistan is predicted to increase the number of refugees forcibly displaced by at least 515,000 people.

Refugees often stay in refugee camps, which provide a haven from the violence or disaster they were facing at home; however, the conditions in these camps are far from comfortably livable. Life as a refugee often includes overcrowding, a lack of food and water and a lack of sanitary methods of eliminating human waste. Refugees may be displaced for 10-26 years on average. In 2016, Brookings reported that “only 2.5% of refugees were able to return to their home countries” and only .001% became naturalized citizens in their countries of asylum.

On average, one out of three refugees suffers from mental health challenges such as post-traumatic stress disorder, depression and anxiety. These mental health challenges cause some to turn to drug use and fosters a dangerous environment in which sexual abuse and assault are rife. A 2017 UNICEF study of the Central Mediterranean refugee crisis highlights that “nearly half of women reported sexual violence and abuse throughout their journeys.” Given the nature of the topic and the fact that not all refugees worldwide had input, this statistic is not entirely representative of the refugee population but does give an idea as to some of the dangers of life as a refugee.

Groups such as the U.N. Refugee Agency and the International Rescue Committee work to ensure that refugees get essential assistance by providing access to food, clean water, sanitation, healthcare and shelter. The U.N. Refugee Agency employs more than 17,878 personnel working in 132 countries and had more than 20 million refugees under its mandate as of 2019. Its budget in its first year was $300,000 which has since grown to $8.6 billion in 2019. Furthermore, the International Rescue Committee has made a vast impact in the Syrian region (Syria, Iraq, Jordan and Lebanon) and Afghanistan in particular. In the Syrian region, the committee has more than 2,000 aid workers and volunteers working to provide access to healthcare, clean water, education and the protection of women and children. Similarly, Afghanistan provides aid to more than 4 million people in approximately 4,000 communities. The organization’s work here promotes healthcare and sanitation in addition to reconstruction projects and education. Turkey, Jordan, Lebanon and Pakistan are among the top countries regarding how many refugees they host.

Additionally, with the number of Afghan refugees that could arise as a result of the Taliban’s take-over, President Biden approved up to $500 million on August 16, 2021, from the Emergency Refugee and Migration Assistance Fund to aid in evacuation and finding refuge. Additionally, in July 2021, Congress passed $1 billion of aid to Afghans for evacuations and visas. Some Democrats in Congress want to add to this amount and “are discussing putting money to help resettle Afghan refugees in the $3.5 trillion tax and spending package.”

How Refugees Affect Poverty in Countries of  Asylum

Some citizens in host countries feel that refugees drain host state resources, overexert healthcare facilities, crowd schools and deplete the host state economy. The money host countries spend to aid refugees is high, but the benefit of adding refugees to the economy as refugees recover and rebuild a life in their host countries can far outweigh this. An economic impact study of three Congolese refugee camps in Rwanda in 2015, published by Proceedings of the National Academy of Sciences makes this clear, stating that “an additional adult refugee receiving cash aid increases annual real income in the local economy by $205 to $253, significantly more than the $120-$126 in aid each refugee receives.”

The Connection Between Poverty and Refugees

Refugees face life-threatening poverty in which they lack access to proper food, sanitation, healthcare and many other necessities. The reality of life as a refugee fosters conditions for extreme poverty as refugees are often forced to flee their homes rather quickly with few or no personal belongings. Host countries that are still developing often take in refugees. While this puts a strain on host countries and temporarily increases poverty, when refugees receive the right tools to succeed, they return more money to the economy than they cost. Thus, in order to break this cycle of poverty within refugee communities organizations like the U.N. Refugee Agency and the International Rescue Committee are working to provide the support refugees need to assimilate into life in the places they seek asylum.