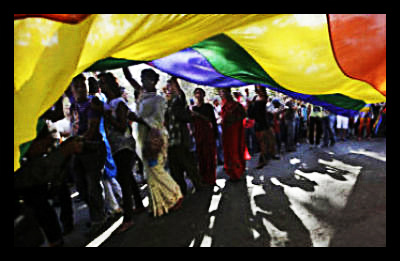 As awareness of homosexuality and Lesbian, Gay, Bisexual, and Transgender (LGBT) rights circle around nation-states, some nations are less willing to accept the concept. In India, for example, there have been conflicts concerning the nation’s ban against homosexual marriages and connections. This is a serious issue as the banning of LGBT rights in India has violated a universal human right. According to the Universal Declaration of Human Rights, every individual has the right to their own marriage and family, freedom of expression and freedom of thought.

In 2009, the New Delhi high court established Section 377 of the Indian Penal Code, which punishes “carnal intercourse against the order of nature” with a penalty of life in prison. The Indian Penal Code is a moral code of conduct that all citizens of India must live by. The establishment of Section 377 led to serious discrimination against people engaging in homosexual acts, who were subjected to frequent beatings and blackmail by the police. NGOs working with sexual minorities have also been harassed and sometimes charged under Section 377.

By denouncing homosexuality and threatening to imprison gay men, Section 377 has likely impeded the battle against HIV. Graeme Reid, director of the LGBT rights program at the Human Rights Watch, argued, “The Supreme Court’s ruling is a deeply disappointing setback for basic rights to privacy, equality, and non-discrimination.”

New laws have led to increased violence and beatings of people in the LGBT community. People who oppose Section 377 of the Indian Penal Code are arrested and sentenced from 10 years to life in prison. Those who support LGBT rights, but are not gay, bisexual or transgender themselves, get beaten by Indian government officials. How would the United States react if American citizens were beaten for supporting LGBT rights?

Many human rights activists have revolted against the Indian Supreme Court, demanding that the Indian government review the Indian Penal Code and rewrite Section 377 to satisfy the people of India. By comparing LGBT rights in India with LGBT rights in America, it becomes clear the extent to which social justice is still evolving all over the world. Citizens that want to help the international LGBT community can take steps to advocate for human rights by volunteering with an NGO in their community.