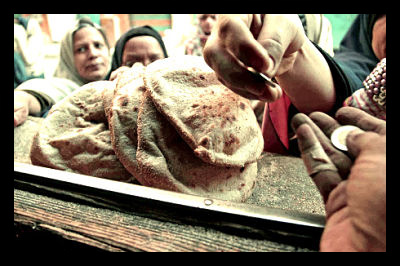 A new tracking tool to measure levels of food security in the Middle East was launched in February. International Food Policy Research Institute (IFPRI) created the tool, known as Arab Spatial, with support from the International Fund for Agricultural Development (IFAD) and the Consultative Group on International Agricultural Research (CGIAR).

The Middle East has long struggled with food security, and researchers, officials, and activists have had a difficult time addressing the problem due to a lack of information. Now, humanitarian aid workers and policymakers working to address food security issues in the region can turn to Arab Spatial for the most up-to-date information on malnutrition, rainfall, crop yields, and much more.

Recent political upheaval has amplified food insecurity in the region. Many Middle Eastern countries depend on foreign imports of staples such as wheat flour. Political and social turmoil has disrupted commerce and economies, leading to lost jobs and even greater struggles for everyday people to put enough food on the table. Statistics on poverty in the Middle East are infrequent and often inaccurate; only about half of the countries provide public access to the numbers.

But Arab Spatial will contribute to more open communication about how best to meet basic human needs in one of the least stable areas of the globe. Perrhian al-Riffai, a senior research analyst with IFPRI, said of Arab Spatial, “High quality and freely accessible knowledge is power, especially for evidence-based research for effective and efficient policy design and implementation throughout the Arab world.”

Arab Spatial measures food security at the national, regional, and local level. More than 150 food security indicators, including information related to poverty, malnutrition, climate, crop production and prices, disease, and trade, can be used to create maps and data. This valuable information should give governments, NGOs, and non-profit organizations working to end food insecurity in the region more power to do so.