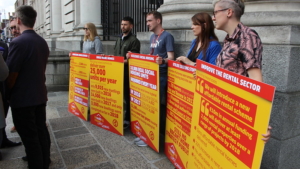 Ireland is suffering from the “longest and most severe” housing crisis the country has ever experienced according to Macdara Doyle, an advocate for housing reform in Ireland. Ireland’s housing crisis has pushed millions of people out of their homes and into poverty with seemingly no end. Irish housing prices and evictions are through the roof, but Raise the Roof, Doyle’s non-governmental organization is pressuring the government to energize its campaign to combat this crisis.

Ireland’s housing crisis has been in the making since the late 2000s when the international housing bubble burst. Due to the burst in Ireland, it became evident that there was a growing lack of suitable and affordable rental living spaces.

The housing market has been unable to keep pace with Ireland’s population growth and urban concentration. There are rough estimates that to keep pace with the population growth and job density in cities, particularly in Dublin, there must be 45,000 new houses built a year. Unfortunately, the average annual number since 2015 has been 15,000. The cost of building materials has remained high since the early 2000s. Worse, the housing bubble exacerbated the costs for housing materials and has made it almost impossible to build houses at all, much less any new affordable housing.

After the housing bubble burst, Ireland’s government faced countless economic problems that left the government scrambling to support its recently unemployed and/or homeless population. Therefore, the Irish government took out loans from the International Monetary Fund (IMF) and the European Union (EU). The funds went to support the workers who lost their jobs in the 2008 recession. Unfortunately, not much went towards the housing crisis itself. It has now returned to haunt the country as both prices and poverty rates skyrocket.

Ireland’s housing crisis has already forced thousands of citizens into poverty and is putting even more at risk of falling into poverty. As of May 2022, just about 20% of Ireland’s population live below the poverty line, and 41.6% of Irish renters risk falling into poverty. That is 952,185 people, just short of a million Irish citizens. Perhaps the most disturbing data point is the 59.1% poverty rate of Irish on rental subsidies after they pay their rent.

The housing subsidies program most widely used in Ireland is the Housing Assistance Payment (HAP). About 20% of private renters receive HAP subsidies. However, a 2022 “Housing Costs and Poverty 2022” report suggests that HAP subsidies are insufficient. It determined that instead of subsidizing the private rental sector, HAP should support the building of social homes. As it states, “It is essential that Government increase spending on actually building social homes instead of relying on and subsidising a dysfunctional private rented sector.”

What is Happening to Fix the Housing Crisis?

Local non-government organizations (NGOs) and the Irish government are putting some small movements and policies in place to end Ireland’s housing crisis. Understandably, these efforts have the public’s growing support. One solution with incredible support is a policy plan that Ireland’s government outlined, and the second is from an NGO: Raise the Roof.

Ireland’s government recently proposed that one of the best ways to raise funds to combat the housing crisis is to change the taxes on the currently empty housing properties with a vacant property tax. The tax will incentivize people to use vacant properties and provide more affordable housing. The Geodirectory database estimates more than 112,000 decrepit or vacant dwellings in the last quarter of 2021.

Raise the Roof advocates that the government doubles its investment to fight the housing crisis. It supports the idea of a vacant property tax. It also suggests introducing a rent freeze. Raise the Roof is generating pressure with almost non-stop public meetings to discuss the issues blocking the Irish government’s ability to end its decade-long housing crisis. Numerous unions and community organizations support the Raise the Roof platform.