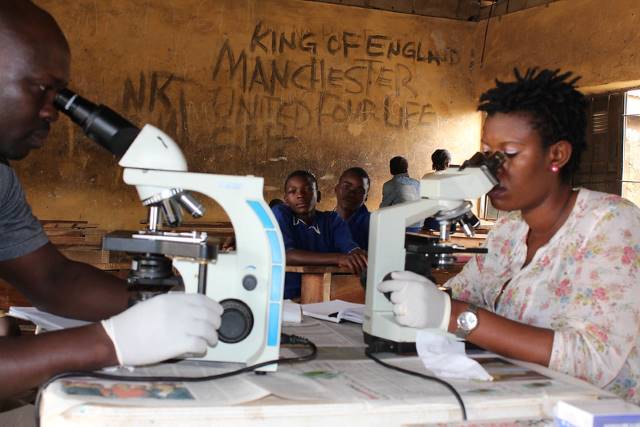 Neglected Tropical Diseases (NTDs) are parasitic, viral and bacterial diseases that largely affect the world’s most impoverished countries. The group of diseases derives its name from the lack of attention NTDs receive in comparison to other diseases. NTDs are most common in regions where people do not have ready access to clean water and proper sanitation as well as adequate healthcare. The National Institute of Allergies and Infectious Diseases (NIH) estimates that more than one billion of the global population suffers from at least one NTD. Intestinal worm infections are among the most common NTDs. For this reason, intestinal worm research can play an important role in eradicating this specific NTD.

Also known as “soil-transmitted helminths,” intestinal worms affect those that come in contact with soil and water contaminated by human defecation and urine. Intestinal worms, such as hookworm, roundworm and whipworm, initially inhabit the intestines of infected individuals. The eggs pass to the ground through human waste. The populations of an estimated 103 countries are affected by intestinal worms. Women of reproductive age and young children are the most susceptible to intestinal worms.

The symptoms for those infected with intestinal worms vary from mild to severe, with some individuals showing close to no symptoms at all. Individuals that display more severe symptoms may develop further conditions such as anemia, malnutrition and stunted growth. Studies currently show that the effects of intestinal worms can be long-term. With the possibilities of “impairment of physical and mental growth” as well as “delayed educational advancement,” cases of intestinal worms can negatively impact a country’s economy by affecting human capital.

Young children carry a high risk of infection. The health problems that arise as a result of intestinal worms affect more than just a child’s physical life. International Child Support in partnership with the Busia District Ministry of Health conducted a study from 1997-2001 in the Busia district of Kenya.

The study finds that “One-quarter of Kenyan student absenteeism is attributed to abdominal pains that are likely due to intestinal helminth infections.” Furthermore, older children often take time off school to care for younger siblings with intestinal worms.

As part of the study, schools with more than 50% of students infected with intestinal worms received deworming drugs on a six-month schedule. Alongside the medicine, the schools received “public health lectures” and training on prevention methods such as washing hands, “wearing shoes and not swimming in the lake.”

Results showed that treating the intestinal worms decreased primary school absences by nearly 25%. Overall, deworming efforts proved to be a cost-effective way to raise school participation rates. Researchers monitoring the children over a span of 20 years found that the treated children received “13% higher hourly wages” compared to children who did not receive treatment.

Overall, deworming treatment ensured the children remain in school to receive an education, impacting their overall life outcomes with improved economic opportunities to enable them to rise out of poverty. The results of the study have informed humanitarian health-focused efforts, indicating the importance of intestinal worm research. Recognizing the “return on investment,” nations such as India, Nigeria and Pakistan treat hundreds of millions of children affected by intestinal worms every year.

Intestinal worms are among the most common neglected tropical diseases, prompting an increased need for further research into the most effective treatments. Results from the study in Kenya show that deworming efforts carry more benefits than harm. Investing in intestinal worm research and treatment can increase the health of those in poverty, allowing children to remain in school, eventually acquiring the tools and knowledge to lift themselves out of poverty.