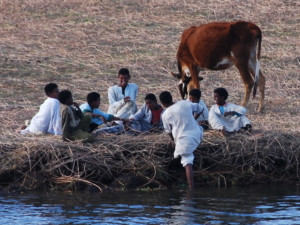 In 2022, inflation has been sweeping across the world like wildfire, and it has impacted the world’s impoverished the most severely. Here is some information about inflation in Egypt.

Inflation on the Rise

Inflation in Egypt rose to 13% in June 2022 from 11% in April 2022, after only seeing an inflation rate of 4.8% at the end of 2021. The Ukrainian war caused an increase in costs of goods which also caused the interest rates in the country to rise. These interest rates were already some of the highest in the world before the increase. These increases in the costs of imported and exported goods have made it much more challenging for the working class of the country to make a living.

There has been an increase in the prices of simple goods like bread, rice and sugar, making it hard for families to sustain themselves, and even things like nuts have moved into the category of luxury for most families. Inflation has affected individual families and Egypt’s economy as a whole as Egypt’s purchasing index contracted for the 18th consecutive month in May which is what caused the country to raise the interest rates for the first time since 2017. This has put a strain on small business owners who sell goods to survive because they no longer can afford to buy the product that they sell.

The U.S. has donated $30 billion in economic aid to Egypt since 1978 in order to provide stability to the region. USAID’s current plan to help the economy is to reduce the rising cost of food in Egypt. U.S. aid to Egypt reduced by 85% from 1998-2020 from $833 million to $125 million in 2020, however, the Biden Administration has requested $1.43 billion in aid for Egypt in 2022 amid the pandemic and the Ukrainian war.

The world cannot control what goes on in terms of the Russian and Ukrainian war, so the Goal of USAID is to impact the country in as many ways as possible from within. As of April 2022, the Biden Administrations’ funds are to go toward creating more and better jobs and enhancing the role of government officials to help the institutions of Egypt meet the economic needs of their people. Inflation in Egypt has been the cause of many people losing their jobs and so plans created to foster the economy are very relevant and should prove useful. Hundreds of thousands of jobs have emerged since 1978 in Egypt due to U.S. involvement, and that growth could be beneficial to combating inflation in Egypt.

The inflation crisis in Egypt is far from over, but the world is taking the proper steps in order to attempt to turn the tides. It may take months or years for one to be able to see the impact of the funds that Egypt received, however, the people of Egypt know that their struggle is not going unnoticed and that can be the spark someone needs to keep pushing for a little bit longer.