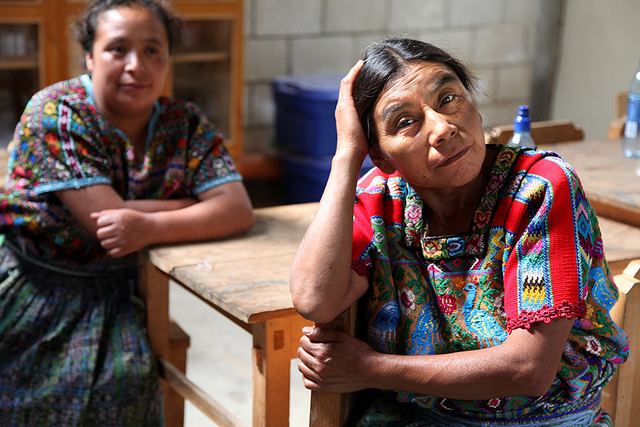 Indigenous Peoples make up 15 percent of the world’s poor and one-third of the world’s extremely rural poor. They are subject to land grabbing, intimidation, discrimination, displacement and violence, and children are particularly vulnerable. When it comes to Indigenous children and education, there are a plethora of struggles faced across the globe.

The list of barriers to educational attainment for Indigenous children includes the devaluation of their own teachings, knowledge and culture, the whitewashing of history and deeply entrenched institutional racism. Rural children often can’t reach schools because they are too far away, and supplies, textbooks and school fees can be too expensive for many families to afford. Even when Indigenous children do reach the classroom, their lessons are not typically taught in their language and their curriculum is not culturally sensitive. They face discrimination and harassment by fellow students and by their teachers.

Quechuan parents in Peru were surveyed regarding their children’s education, and many revealed that they wouldn’t even teach their children their mother tongue at home for fear of the ostracization they would face at school. This fear and disenfranchisement leads to disproportionately low enrollment rates and high dropout rates.

In 2012, Indigenous students made up 4.8 percent of all students, which is double their relative proportion of the population. The Indigenous population is young and growing, leading to higher school enrollments. This comes with its own challenges. Connecting Indigenous children and education – quality, accessible education – requires teachers to work hard to respect Indigenous culture and incorporate it into their curriculum.

Schools must also provide other resources to Indigenous children. According to a report by The Conversation, “many (not all) Indigenous children are under stress (educationally, socially, emotionally) due to low income, family mobility, overcrowded homes, and poor health and disability.”

The Murri School in Queensland, Australia, partners with Aboriginal health services to provide family support and healthcare, as well as occupational therapy, to their Indigenous students. This holistic approach better meets the needs of Indigenous students and increases retention rates.

In 2010, there were no Indigenous adolescents enrolled in university in Cameroon. At the primary and secondary level, birth registration cards were often required for enrollment, and Indigenous Peoples face many barriers to receiving identity cards and being properly registered. Additionally, the academic calendar did not align culturally with Indigenous Peoples such as the Baka. Children were kept out of school to work in the forests with their parents.