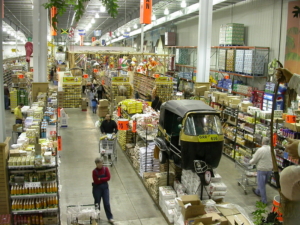 India’s e-commerce and retail companies are calling for more workers as they prepare for their next busy season. One of India’s online grocery companies, BigBasket, has increased its number of positions from only 500 to 2,200 from March to June 2022. BigBasket is seeking more employees to help the company reach 6,000 delivery workers by April 2023.

India’s e-commerce began in 1995 and boomed in 2013 when Amazon first began operations in India. Amazon opened the doors for new e-markets and helped Indians explore new job possibilities. India’s e-commerce market’s job openings have grown exponentially as India’s internet penetration and cell phone usage have increased. With the growth of the e-commerce market in India, countless grocery e-commerce companies are seeking new employees to expand their reach and improve their economic foothold in India.

Without the hassle of traveling to the store, fighting crowds, and missing work, the e-commerce grocery options are incredibly appealing to consumers. Most of the major Indian grocery e-commerce companies promise delivery of 10 to 15 minutes, making them a very easy tool to use. The market value of e-commerce grocery stores reflects their consumer appeal and predicted value. Many economists expect the Indian e-commerce grocery market to have a market value worth $26.6 billion by 2027.

India’s job market hit a milestone, with unemployment dropping to 6.8%, dipping below 7% for the first time in half a year. The e-commerce job market in India has improved as unemployment rates decrease and job turnover eases, creating a stronger sense of job security nationwide.

India’s inflation rates have improved the state of the e-commerce market. Inflation rates have risen worldwide as the war in Ukraine continues. The war has slowed supply chains, halted transportation of essential goods, and, with sanctions against Russia, prices skyrocketed internationally. The soaring prices have caused inflation to rise, which has left many nations scrambling to slow interest rates domestically. India’s inflation rate hit 7.8%, an eight-year high for inflation in India, between May and June 2022 before the rate began decreasing to 6.7% as of August 2022. As unemployment rates decrease, so do poverty rates. Poverty rates have dropped 12 percentage points to 10.3% since 2011. India’s government slowed the rise in food and gas prices.

The slowed increase in prices has helped the government get a handle on the inflation rates, reducing the need for hiking commodity prices. As the interest rate lowers, so do the costs of retail items, specifically groceries. Reduced grocery prices will ease the economic burden and give consumers more faith in the reliability of the grocery markets. In preparation for the expected increase in demand for grocery delivery, e-commerce companies are looking for extra employees to fill the growing number of workers needed.

India’s busy season is its festive season from August to December. The festive season features months of extra events, family gatherings and increased funds circulating in the economy. In 2021, economists predicted the festival season would result in approximately $9.2 billion spent through e-commerce sites.

India’s e-commerce is flexible for anyone seeking full or part-time work, and the jobs are spreading from the urban areas to India’s rural sectors. The significant companies expect increased demand for their delivery workers and retailers. They expect this demand to last, which will benefit India’s economy and population in both the long and short term.

In the short term, the jobs will result in extra money flowing into the economy and additional money in people’s pockets. In the long term, the jobs will provide more benefits than a small economic flow. The jobs will provide a secure income that empowers the poor beyond their bills. The certain income will keep job turnover low, saving companies money and allowing them to pay their employees higher wages. The higher wages and low turnover will, in the long term, create a noticeable difference in the economy and poverty and employment rates. The demand for India’s e-commerce shows that these jobs will be open and available. India’s e-commerce is a growing market that will remain strong for years to come.