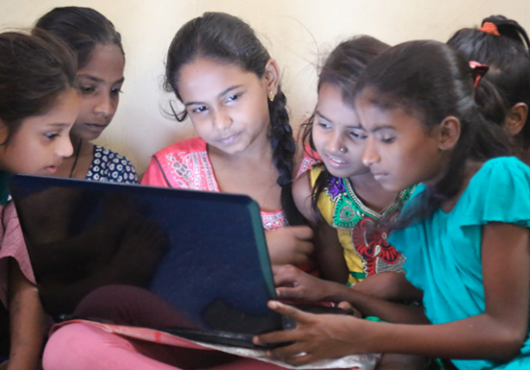 Dharavi is Asia’s largest slum and is located in the middle of Mumbai, India’s financial capital. The slum is home to nearly a million people. Within that population, teenage girls have been learning how to code in order to develop mobile applications that can help tackle different problems within their community.

Filmmaker Nawneet Ranjan founded the Dharavi Diary project, which teaches young girls in the slum to code. With this skill, the girls can then develop mobile applications that aim to combat everyday issues  including “sexual harassment, access to water and education.”

Ranjan first became involved in working with the Dharavi community after he made a film titled Dharavi Diary in 2012. The film documented issues faced by the slum’s residents.

He then set up a small computer lab in 2014, with the goal of encouraging young girls to become changemakers. The result of their involvement in the program can ultimately lead them to better education and more employment opportunities.

“A lot of girls in the neighbourhood don’t get the chance to use computers and laptops,” Ranjan told Mashable. “I showed them how technology can be used to solve problems and improve their job opportunities. I told them that these were things that they could learn on their own.”

The project experienced a setback when the slum was destroyed by a fire on Jan. 4, 2016, destroying tablets and computers as well as the homes of over 50 families in the neighborhood.

However, through a new crowd-funding campaign, Ranjan hopes to raise more resources to buy more computers, laptops, and food and clothing for the children.

One app that a group of girls developed, for example, is called Paani, which alerts residents of the slum when they collect water from the community tap. This allows members of the community to avoid waiting in long lines for the water every day.

In a country where access to clean water is a luxury, the responsibility of collecting water often falls on girls, who consequently must miss school as a result of waiting hours for the essential resource.

Another Android App, Women Fight Back, focuses on women’s safety. Its features include SMS alerts, a distress alarm and emergency calls to contacts on their phones, according to Business Insider.

“When we joined the program we decided first to look at the problems that our neighborhood and community faced, and then build apps to address them,” said Ansuja Madiwal, a 15-year-old girl, in an interview with The Hindu.

“In a small way, initiatives like this help in giving people a greater sense of participation and an awareness of the problems that they face and how they can devote resources to solving them,” said Ranjan.

Surprising Ways Smartphones are Helping RefugeesWhat is Advocacy in Terms of Helping the Global Poor?
Scroll to top