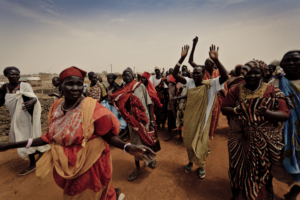 Public discourse surrounding political, human and women’s rights in Sudan is experiencing a major shift. Issues of political and social participation and freedoms have been at the forefront of Sudanese protests in recent years. Women have played a major role in breaking down norms and building up a new female identity.

Sudan still faces major internal conflict due to the secession of South Sudan and the ensuing conflict in 2011. In recent years, the role of women and their rights has come into question for the Sudanese people. Women in Sudan have specifically felt subjugated due to legal regulations and celebrated when the country eradicated these laws.

A key facet of these issues is class. Upper-class women wear different clothes than poorer women in Sudan. This discrepancy is not only troubling but deeply rooted in socio-political inequity. BBC reported that “in recent years it was common to see rich Khartoum women wearing trousers in public—while those targeted by the morality police were often poorer women from the marginalized areas on the periphery of this vast country.”

The Global Fund for Women outlines the varying causes for many of the protests in Sudan. Some of the protests took place at military headquarters. The protestors staged a sit-in and called for “civilian rule, women’s rights and an end to the nation’s civil wars.”

Some of the specific regulations that women want to change are in regard to their physical appearance. Some examples Sudanese would like to change include how they must dress or cover their hair. Breaking any of the current rules can result in harsh and demeaning punishments. GFFW reported that “thousands of women have been sentenced to floggings under the laws, with poor and minority women particularly affected.”

The protestors filling the streets are primarily women, an estimated 70%. These women come from many backgrounds ranging from students to housewives to street traders. This diverse group of females march the streets while chanting, clapping and singing. Amidst the clamoring for change, human rights violations also occur.

There was an increase in violent attacks during many of the protests in favor of women’s rights in Sudan and the ending of the civil conflict. There have been instances of rape, disfigurement and burnings. The military more subtly uses sexist language and insults as another weapon against those protesting for women’s rights in Sudan. Human Rights Watch asserts that this retaliatory violence “escalated following the Arab uprisings, the secession of South Sudan in 2011, Sudan’s economic downturn and the proliferation of new wars in southern Kordofan and Blue Nile.”

The push for women’s rights in Sudan is progressing forward and incorporating the issues of class and poverty. The country now realizes that the need for comprehensive human rights laws (and specific laws protecting women) is urgent.

The women’s movement is strong but needs continued organizational support. There are few laws currently in place to protect women and children and this must change. Protests, as well as the documentation of human rights violations, are not enough. The government needs to create change and protect its citizens. Women, just like all other citizens, deserve human rights.

5 Facts About Poverty in the Central African RepublicCotopaxi Foundation: Geared Toward GOOD
Scroll to top