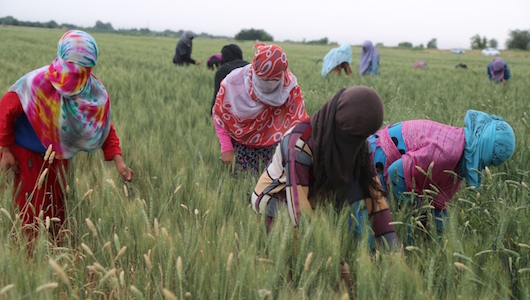 Posht-e-Bagh Research Farm is one of the most important research farms in northern Afghanistan. Nestled in the Dehdadi district of the Balkhl province, the farm produces breeder seeds. These genetically improved seeds flourish under local growing conditions, enabling farm productivity to increase.

Currently, the 16 employees of Posht-e-Bagh monitor 972 different types of wheat in order to assess their suitability for local growing conditions.

Every seed produced at Posht-e-Bagh passes through five initial stages: introduction (where seeds and the resulting crops are assessed for their suitability), selection, hybridization, mutation and genetic engineering. From there, a breeder seed is selected and then sent out for further processing before reaching farmers in the form of ‘improved’ seeds.

According to Abdul Wahid Wahidi, a researcher with the Ministry of Agriculture, Irrigation and Livestock (MAIL), the main goal of Posht-e-Bagh is to increase the productivity of farmers in northern Afghanistan. The eventual production and wide-scale distribution of improved seeds will help generate a long-term solution to the eradication of poverty among farmers.

Breeder seeds produced by farms like Posht-e-Bagh Research Farm are sent to one of six Improved Seed Enterprises (ISE) scattered across the country with the goal of multiplying the breeder seeds into foundation seeds. On such a farm is Khasa-Paz farm, where there are six varieties of wheat being grown on the 1.9 million square meter farm this year.

ISE farms eventually sell the seeds to one of 102 Private Seed Enterprises (PSEs) across the country. They then use these seeds to produce the certified seeds, or ‘improved’ seeds, which are distributed to local farmers. 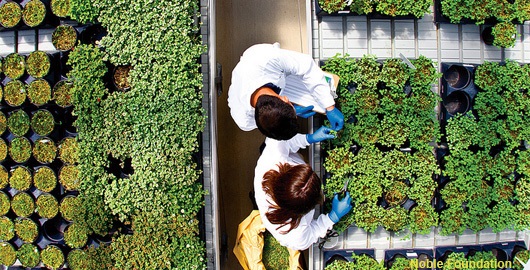 “Improved seed is a vital input for proper crop production,” said Hesamuddin Rahimi, Afghanistan Agriculture Inputs Project (AAIP) Agronomy Manager in Balkh Province. The AAIP, launched in July 2013, is backed with $74.8 million in support from the Afghanistan Reconstruction Trust Fund (ARTF). It is their aim to strengthen institutional capacity for the safety and reliability of agricultural inputs and sustainable production of certified seeds.

“Khasa-Paz farm has managed to help farmers to some extent,” Rahimi said. “As it is one of the farms where tons of registered seeds are being produced and sent to PSEs to produce improved seeds for distribution to the market.”

“The improved seeds result in good harvest. There is an almost 60 percent increase in yield of improved varieties compared to the local seeds,” Rahimi said. “The good thing about the improved seeds is they are suitable for this climate, a factor that increases both the quality and quantity of the crops.” The crops are also resistant against pests and diseases, adds Abdul Fatah, a farmer at Posht-e-Bagh farm.

Many farmers across Afghanistan still use low-quality seeds that result in poor harvests, a critical factor in perpetuating poverty among farmers. Those who have used the improved seeds now see the difference in output.

“Luckily now, farmers’ conditions are better because of the improved seeds,” Mohammad Ghani, a farmer who has been working on Khasa-Paz for eight years, said.

Farmer Lal Mohammad, a colleague of Ghani’s, echoes that sentiment: “Now that I see and understand the difference between good and poor quality seeds, I try to share the knowledge that I have gained with other farmers I know.”

“Orange the World”: Calls for an End to Violence Against Women Improving Education in Pakistan’s Sindh Province
Scroll to top