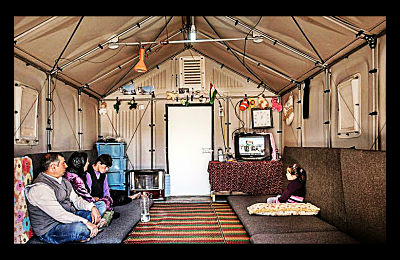 Nearly four million refugees have fled Syria in the last four years. In 2013, almost 51 million people were displaced from their homes worldwide. This marks the highest global refugee population since World War II. In camps, the only shelter these displaced families have are flimsy tents. A new mobile shelter called the Better Shelter could offer a safer, more dignified solution to the challenge of housing refugee families.

IKEA Foundation and the United Nations High Commissioner for Refugees have joined forces to improve the housing options for displaced families. The shelters come in two flat cardboard boxes, can be assembled without additional tools by as few as four people in less than a day. At 188 square feet, they can house up to five people and come with weather-proof panels, a solar powered lamp and cellphone charger and a door that locks.

Shaun Scales, Chief of Shelter and Settlement at UNHCR, has lauded the Better Shelters as, “…an exciting new development in humanitarian shelter and represents a much needed addition to the palette of sheltering options mobilized to assist those in need. Its deployment will ensure dramatic improvement to the lives of many people affected by crises.”

The houses were designed by a team in Sweden with the goal of making a temporary housing solution that was sustainable socially and environmentally. After UNHCR and IKEA became involved in the project, Better Shelter was tested by refugees in Ethiopia and Iraq. Their needs and critiques were central to the design process and helped shape the final product.

The Better Shelters cost about $1,150, about twice as much as the makeshift tarp tents that spring to mind when refugee camps are mentioned. This is mostly because the shelters are more akin to mobile homes. The locking doors add a layer of security and privacy that is currently all but forgotten in the overcrowded camps, and could help reduce the staggeringly high rate of sexual assault. With weatherproof walls, interior lighting and a solid foundation, the shelters are designed to last for about three years. That’s six times as long as the standard tents usually last.

“Even though the upfront price is double that of an emergency tent, the solution is still more cost effective considering its longevity,” explains Johan Karlsson, head of Business Development at Better Shelter. “We’re working hard to get it below $1,000, and we see good potential to achieve this within the next two years.”

UNHCR has purchased 10,000 of the Better shelters and plans to distribute them this summer, potentially housing 50,000 refugees. Although 50,000 of the 13 million people who rely on UNHCR may seem like a drop in the bucket, it is a promising start for a product that could ease the pain of displacement.

Crimes Against the Homeless Poverty in Jakarta
Scroll to top