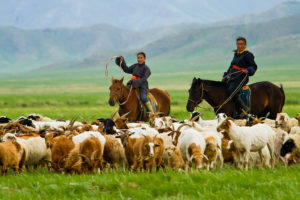 Mongolia, a country bordering China and Russia, faces problems regarding food distribution. With over 35% of the population suffering from malnutrition, food scarcity is an ongoing problem. However, there are organizations work to reduce hunger in Mongolia.

Over 65% of households in Mongolia suffer from food insecurity. This means that thousands of Mongolian families lack access to food and other essential items. Youth are affected by Mongolia’s food insecurity. Children, especially those under age five, suffer stunting, wasting and low birth weight in households that lack access to proper nutrition.

One critical factor has been a big part of Mongolia’s ongoing struggle with food distribution, various national disasters. The unique natural circumstances in Mongolia have been labeled as Dzuds, where the combination of low precipitation and temperature swings have heavily impacted the way Mongolians have lived.

Heavy winds and blizzards severely hurt Mongolia’s livestock. With temperatures decreasing below minus 40 degrees Celcius, Mongolia has seen a loss of over 44 million livestock. Losing millions of livestock hurt food distribution and job security, specifically because 63% of Mongolia’s rural household’s assets are livestock and over 35% of Mongolia’s workforce is dependent on herding. Livestock is also a key source of food to hundreds of thousands of Mongolians, leading many to lose a critical source of nourishment.

These catastrophes are generally met with no aid, as the government lacks the resources to help those in need.

Much is being done to combat hunger in Mongolia. Various organizations, such as Action Against Hunger, have stepped up to help Mongolians in need. They have reached over 40,000 people through water and sanitization systems. In addition, they have established food-security strategies and emergency relief for those in need.

Another organization, Food for the Hungry, has distributed food to hundreds of rural herders who were hurt by the harsh weather conditions. In addition to donating food, the organization has made advancements in agricultural development, child development projects, food assistance and health programs.

Outside of donations, the Food and Agriculture Organization of the UN has taken the initiative to educate farmers about building resistance to weather conditions. 19 experts were sent to Mongolia to promote food security and teach aspects in poultry farming, technology expansion and capacity development. These lessons were quickly adopted by Mongolian farmers and they have seen massive improvements in efficiency and resilience to weather.

Many people in Mongolia struggle with food insecurity. A major cause of this lack of access to food is Mongolia’s unique weather conditions that lead to livestock losses. While hunger in Mongolia is something many people are facing, there are organizations working on solutions. These organizations have helped Mongolian farmers through education, while also distributing food to people in need.