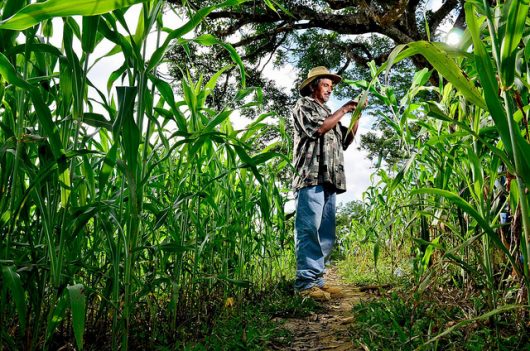 It is estimated that 1.5 million people will face hunger in Honduras at some point every year. Honduras is the third poorest country in Latin America and the Caribbean, with over 62% of the population living below the poverty line.

Rural areas of Honduras are even more susceptible to issues of hunger due to higher poverty levels and a lack of food security. Chronic malnutrition levels can reach up to 48.5% in the poorest rural areas.

According to the World Bank, Honduras is ranked ninth among countries with high-risk of mortality from exposure to two or more hazards. It is one of the most vulnerable countries to extreme weather conditions. Hunger in Honduras, therefore, is largely due to the reoccurrence of natural disasters such as flooding, drought, and hurricanes.

For small-scale subsistence farmers living in rural areas of Honduras, exposure to the disasters aforementioned can both decrease production and ruin crops and further prevent access to food and nutritional security.

Things, however, are looking up. Numerous global organizations, including the World Bank and World Food Programme (WFP), are initiating projects to alleviate Hunger in Honduras:

The Corredor Seco Food Security Project is projected to lift 50,000 Hondurans out of poverty and reduce chronic malnutrition among children under the age of five by 20%. In order to achieve this goal, the World Bank is supporting small-scale farmers in one of the most drought-stricken areas of Honduras. The project will support the introduction of high-value crops, improve access to new markets, and increase food production.

In a recent press release, World Bank Representative in Honduras Giorgio Valentini stated, “This project is of vital importance because it aims at fighting poverty in rural areas, where most of the poor are concentrated, and to boost agriculture, one of the key sectors of the country’s economy.”

In 2009, the School Meals Programme joined with WFP’s Purchase for Progress (P4P), which has been supporting agricultural production for small-scale farmers by connecting them to the local markets.

Two years later, nearly half of the maize and beans for the school meal rations were bought from smallholding farmers participating in P4P. In turn, the farmers’ yearly income was estimated to have increased by $500 and their crop yields by 50-80%.

With the support of global organizations like the World Bank and the World Food Programme, farmers increase crop production, children receive adequate nutrition, while poverty and hunger in Honduras continue to decrease.

Inheriting Poverty and How Education Can Break the Cycle New Budget Emphasizes Security, Youth and Education in Kenya
Scroll to top