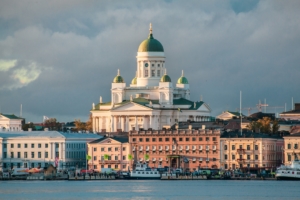 Despite enjoying one of the world’s most advanced social-democratic welfare systems and the lowest human insecurity rates, there are still major struggles with poverty and hunger in Finland.

The first signs of hunger in Finland emerged following a financial crisis in the 1990s which resulted in roughly 100,000 Finnish people reportedly hungry during the years 1992 and 1993. As a result, the foundation for a network of charity-based food aid provisions proliferated in Finland during the 1990s. Several spikes occurred in CFA rates in the late 1990s, with the largest increase at the turn of the century.

What is interesting about this particular response to food insecurity in Finland is that, in principle, the Nordic welfare state “is assumed to provide universal social security against social risks, such as poverty, for all its citizens.” However, at-risk people in Finland have received support largely through charity-based food aid, indicating that the current welfare state falls short of feeding everyone.

In 2013, EVIRA, the Finish Food Safety Authority, improved food safety regulations by allowing food and retail industries to donate food to charity with greater ease. This new food waste redistribution project was part of a new wave of social innovations in the greater E.U. which operated in efforts to reduce food insecurity and ecological waste.

As of 2014, the CFA in Finland had 400 distributors “including parishes, FBOs, unemployment organizations and other NGOs.” It reached roughly 22,000 Finnish people every week.

Statistics Finland’s research shows that the number of people at risk for severe poverty and homelessness was 890,000 in 2017, which is roughly 16.4% of the population. Findings from the European Anti Poverty Network (EAPN) Poverty in Finland Report from 2019 show that the number of people living on minimum income benefits and experiencing livelihood problems such as food shortages continues to be a growing problem. The share of Finns turning to food banks every week was roughly 20,000 in 2019. The risk of poverty and malnutrition is highest amongst single mothers and older women living alone, according to the National Council of Women in Finland. Finland is also among one of the most racist countries in the E.U., making it even harder for migrants, especially women, to achieve success in the current economic climate. As a result, many migrants in Finland are poor and at risk of food insecurity.

Progressive social reform strategies such as Finland’s Housing First strategy with the extensive food aid provision network in the country have the power to eradicate hunger in Finland. In fact, Finland’s Housing First strategy already accomplished a lot in regard to shelter insecurity in the country. Perhaps a stronger state role in providing food aid could be the extra push necessary to completely tackle the stagnating food insecurity problem.

5 Facts About Healthcare in RomaniaHunger in Moldova: What You Need to Know
Scroll to top