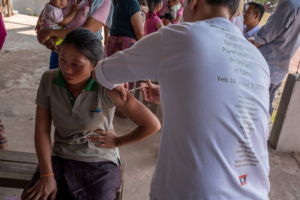 Despite the changing direction of attention away from other illnesses and towards COVID since the beginning of 2020, Laos has made significant forward strides regarding HPV (human papillomavirus) and Laotian health. In March 2020, the program for HPV vaccines in Laos was founded as an active response to the high number of deaths due to cervical cancer. In Laos, at least 320 women are infected with HPV every year; 182 or around half of the sufferers die from the illness. The vaccines were first distributed in a high school in the Xaythany District in Vientiane Capital. Schools across the country administered the vaccinations shortly afterward to increase HPV prevention in 360,000 girls from the ages of 10 to 14.

Why Does This Matter?

The new vaccination program is significant considering that cervical cancer is the third most common cancer in Laos. It is also second-highest cancer to cause premature death or disability next to liver cancer. Furthermore, Laos is the eighth Southeast Asian country to have high rates of cervical cancer according to an age-standardized graph. More middle-aged women from the ages of 40 to 64 years old are diagnosed with cervical cancer each year: 197 a year compared to 62 older women and 61 younger women. Of the 197 middle-aged women who contract cervical cancer, 101 of those women die from the disease.

Logistics of the New Vaccines

Gavi, the Vaccine Alliance, and the government both contributed to the price of the HPV vaccines in Laos. UNICEF helped the Ministry of Health as well as the Ministry of Education and Sports to implement the vaccination of adolescent girls. The government vaccinates girls early on to battle HPV as a preventative measure as opposed to treating it at advanced stages later on in life. The vaccines work to prevent the infection of two strains of HPV, 16 and 18, which cause 70% of all cervical cancer cases due to HPV.

This is not the first time that there have been HPV vaccines in Laos. They were first introduced in 2013 as part of a demonstration of the vaccine’s effectiveness. The vaccines were confined within the Vientiane province until 2015 when the government completed the demonstration successfully. This most recent round of vaccinations was the first time the HPV vaccine was produced nationally.

HPV vaccination in Southeast Asia is relatively new. Most countries are giving priority vaccination to illnesses like DTP (diphtheria, pertussis, and tetanus) and measles. These illnesses are also the three garnering the most vaccinations worldwide. Because HPV is a newer vaccine for low and middle-income countries, there is still much to be done about the vaccination process. For example, low and middle-income countries still experience a dropout in between the first and final doses of HPV. This leaves many women at risk. Still, due to GAVI’s implementation and increasingly lower prices, countries like Laos can expect a decrease in cervical cancer fatalities.

HPV is a serious, cancer-causing infection afflicting countries all over the world. Fortunately, Laos is keeping up with other low and middle-income countries with their vaccination program. With the help of GAVI and UNICEF, Laos can increase vaccine availability and effectively combat one of the deadliest cancers in the country.