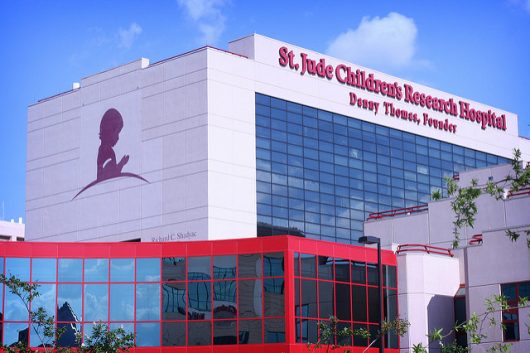 Every year many families are confronted with the difficult diagnosis that their child has cancer. Researchers at St. Jude Children’s Research Hospital in Memphis, Tennessee are familiar with this harsh reality and are on a mission to bring needed resources to families of impoverished children with cancer worldwide.

According to pediatric oncology researchers, 80 percent of the 160,000 children that are diagnosed with cancer worldwide have limited access to quality care and thus have a lower chance of surviving the disease. St. Jude is leading the way people understand and treat childhood cancer and have established an initiative named St. Jude Global to help spread their valuable resources overseas to reach children with cancer worldwide.

The initiative is composed of researchers and healthcare providers who have brought together resources including quality facilities, treatment protocols and research programs to address the needs of children with cancer worldwide, especially those living in developing and third-world countries.

Collaborations have been established in Central and South America, the Caribbean, Africa, the Middle East, Asia and Oceania, as well as include over 28 countries as current beneficiaries.

Easing the Burden for Families

Over the years, St. Jude’s partnership with international organizations has helped reached vulnerable children in developing and third-world countries and brought progress to the sobering statistic of childhood cancer worldwide. Some of these programs include:

As a result of  St. Jude’s global partnerships with international organizations, thousands of children have benefitted from life-saving treatment.

In China, St. Jude’s collaboration with Beijing Children’s Hospital and Shanghai Children’s Medical Center increased the number of treated patients with ALL in mainland China from 10 percent before the year 2000, to over 90 percent as of 2014.

Furthermore, the Asociación de Hemato-Oncología Pediátrica de Centro América (AHOPCA) has been able to successfully fund treatment for thousands of cancer patients since the year 2000. Although there is still progress to be made with the fight against childhood cancer worldwide, St. Jude Children’s Research Hospital remains a strong force in the efforts to ensure that no child dies of cancer anywhere.