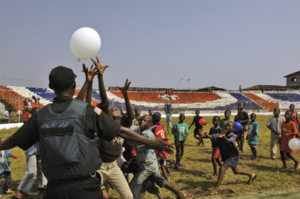 Play Soccer Make Peace (PSMP), is an initiative to unite war-torn communities through soccer. The coordination, teamwork and communication that is needed in order to play soccer is a great way to bring people together who are usually divided by social and political factors. In order to participate, players must follow rules, codes of conduct and keep emotions in check. The goal is ultimately to win a tournament so that it will distract the community from its political conflict. The PSMP initiative originally began as a project by the Universal Peace Federation (UPF) and the World Association of NGOs (WANGO) as an effort to bring down borders in conflict-strewn areas. In July 2004, Nigeria hosted the first Play Soccer Make Peace tournament.

Nigeria has a long history of ethnic conflict deeply embedded in its colonization by Britain. Nigeria has roughly 250 ethnic groups, which has made it difficult for the country to be socially and politically unified. The PSMP tournament offered the opportunity for individuals of different backgrounds to put behind their differences for the sake of sportsmanship and teamwork.

UPF and WANGO also ran pilot programs in Gaza, Israel and Jordan in 2007. The Palestinian Football Association and Ministry of Sports and Culture took part in selecting teams and players to participate in the pilot tournament. The tournament was the largest tournament in Gaza and hosted teams from both Fatah and Hamas at a time when the two were in conflict with each other.

The initiative is quickly growing and has even brought together Arab and Jewish youth in northern Israel. Arabs and Jews do not have the chance to meet very often but the tournament gives them the opportunity to work together. Soccer in war-torn communities is laying the groundwork for social reconciliation, which is an important aspect of community healing from conflict and violence.

Expansion of Sport as a Unifying Force

Other nonprofits are quickly taking up the concept of sport as a unifying force. The nonprofit, Ultimate Peace aims to build trust, friendship and leadership in conflict areas through frisbee. The organization does not aim to bring peace to the Middle East, as that would require deeper political and governmental cooperation. They are mainly focused on healing and bringing communities together that have endured heavy political and social divisions.

The nonprofit Soccer for Peace was created from the PSMP initiative. The organization has camps where they build soccer skills and foster communication and trust in Israel between Arab and Jewish youth. The nonprofit has been successful thus far at bringing together an unlikely group of young people and making them cooperate with each other.

The United Nations Education, Scientific, and Cultural Organization (UNESCO) recognizes that sports can be used to promote peace, as it gives the opportunity for conflicting sides to push aside geographical borders, social class and political division. Play Soccer Make Peace has become a massive movement and has inspired the creation of many other organizations with the same principals and goals.