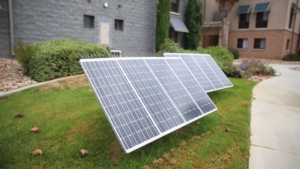 Energy poverty or the lack of access to modern energy services, including electricity and clean cooking facilities, remains a barrier to global prosperity and individual well-being. That is why ensuring basic energy for 100 percent of the world’s population by 2030 is one of the United Nation’s Sustainable Development Goals. Yet, at the current rate of progress, 650 million people will still live in the dark. Microgrids have the potential to improve that course and eliminate global energy poverty.

Microgrids or mini-grids are small, localized power grids. They can operate on their own using local energy generation without needing a connection to a larger power grid. Renewable resources power most along with diesel back-up and batteries.

Microgrids can power fridges, fans, irrigation pumps and other basic machinery. With microgrid energy, families can power appliances that save time on household chores, farmers can increase crop yield with irrigation and schools can light their classrooms.

With low costs and high yields, microgrids could end global poverty. The price of batteries, solar and other energy technologies has been decreasing since 2010, in turn reducing the cost of microgrids. The International Energy Agency named localized power grids as the most cost-effective option to deliver electricity to more than 70 percent of the unconnected. Continued innovation will further drive cost reduction.

Microgrids are also modular, easy to transport and simple to install. This makes them especially valuable in remote and rural areas.

In India and Sub-Saharan Africa, microgrids are already electrifying and transforming communities. SmartPower India, with support from the Rockefeller Foundation, has used microgrids to power more than 100 villages and serve 40,000 people. Since the project launched in 2015, carpenters and tailors have more than doubled their productivity, farmers have built cold storage facilities to keep produce and entrepreneurs have opened small businesses. Local economies grew by $18.50 per capita.

In Kenya, a solar company is using microgrids to deliver power to villages deep in the African bush. SteamaCo’s microgrids supply 10,000 households and businesses across 25 villages with electricity. This has allowed for businesses to trade longer, students to study after dark and communities to grow more independent.

A lack of access to modern, reliable and affordable energy services hinders communities and cripples economies. It is time to turn the light on for the billions of people without access to electricity. Microgrids could end global energy poverty.