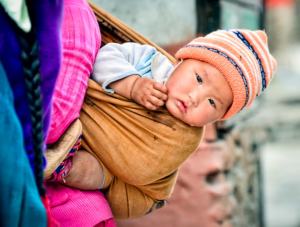 An estimated 390,000 babies die within their first months of life annually due to severe infections. For the past decade or so, USAID has been combating this number with a low-cost yet highly effective antiseptic called Chlorhexidine. The chemical is typically used in hospitals to either disinfect the skin before a surgery or to sterilize surgical equipment, but USAID says that the antiseptic “can also be used to protect the umbilical stumps of newborns to prevent life-threatening complications from an infection.” These infections, USAID explains, can in part be a regular consequence of the traditional home birthing practices found in poorer countries. After conducting multiple studies, it has been shown that even a “one-time chlorhexidine treatment can lower the risk of severe infection [in infants] by 68 percent and infant death by 23 percent.”

Because it is relatively cheap, easy to manufacture and proven to be effective, around 30 nations throughout Africa and Asia either expressed interest in the antiseptic or have begun working with USAID to integrate the antiseptic into their healthcare system over the past several years.

Nepal was the first nation to implement the treatment back in 2011. It has since reduced the likelihood of infant illness and mortality by 34 percent. The success in Nepal is what inspired a chain-reaction that lead to the antiseptic being adopted into a variety of different countries—but the success of the disinfectant did not come without its challenges.

Before Chlorhexidine was initiated into their health system, the World Health Organization (WHO) recommended that the nation adopt a dry care system to treat the umbilical cord; this system required that the mother keep her child’s umbilical stump clean and dry until the stump fell off on its own while she kept an eye out for any signs of infection.

Due to cultural barriers, this suggestion was not followed. USAID said that mothers in Nepal had been used to routinely applying unsanitary substances such as turmeric, ash, cow dung or a mercury-based red cosmetic powder used by Hindu women to the umbilical stump by hand. Thankfully Nepal has been impressed with the results Chlorhexidine has supplied but the earlier setbacks in treatment shed an important light for USAID and its partners on how complex assimilating a scientifically safe treatment into impoverished nation’s culture can actually be.

Today, both single-dose tubes of the antiseptic are freely distributed to all expecting mothers in their eighth month of pregnancy and a one-on-one training session explaining how to safely apply the gel after cutting the umbilical cord.

Pakistan implemented the treatment in 2014. Pakistan reportedly has the third-highest newborn mortality rate in the world, with umbilical cord infections serving as the second leading cause of death to Pakistani newborns. Seeing as Pakistan is a much larger and complex country, it faced a different set of challenges than Nepal when it came to making the antiseptic widespread.

There were some cultural barriers to overcome in Pakistan as well—many Pakistani women used to treat umbilical cords with surma, a lead-based concoction)—but the main challenge the nation had to overcome was to bring together all the government and private offices working towards a Chlorhexidine treatment program independently. To convene all of these health offices together and collaborate on an implementation plan was no small feat and took around a full year, and then the plans were formally adopted another year later, in 2016.

Of course, Chlorhexidine comes with its own set of risks. Although it has been found to reduce infections, it has also been discovered to cause rashes and burns on some skin types. Even so, the use of Chlorhexidine in both Nepal and Pakistan shows that although the process of assimilating treatment is not always easy or quick, it yields hopeful results that encourage nations in the surrounding areas to adopt the life-saving drug as well.