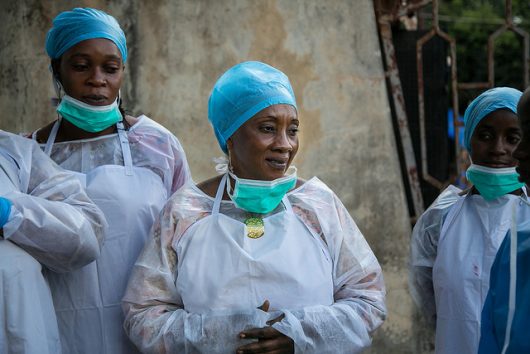 A rapidly spreading virus with a high fatality rate and no cure, Ebola was first recorded in Guinea in 2013 with the death of a local two-year-old boy. This marked the first outbreak of Ebola in all of West Africa. Since then, the highly fatal virus has been spreading throughout neighboring countries such as Sierra Leone and Liberia, leaving a trail of death behind it.

History of Ebola in Guinea: A Look at the First Case

A two-year-old boy living in the remote village of Meliandou, Guinea, Emile Ouamouno is the first recorded case of Ebola in West Africa. According to the EMBO Molecular Medicine journal, researchers believe Ouamouno was playing with bats in a hollowed tree trunk when he contracted the virus. He died two days later after battling a fever, vomiting and black stool. His mother, sister and grandmother expired soon after. The deadly virus was spreading. In a span of four months, residents of Meliandou buried 14 people due to Ebola. By March, the virus had emerged in Sierra Leone, Liberia and Nigeria. Panic began to set in around the globe.

Containment and Quarantine in Guinea

It wasn’t until months later that Ouamouno’s death was recognized as Ebola. On March 23, 2013, the World Health Organization (WHO) announced the outbreak in Guinea and reported that 49 people were already infected.

The same month, Guinea’s President Alpha Conde declared a 45-day national health emergency. In a national statement, Conde banned those who had contact with Ebola victims from leaving their homes and anyone who disregarded this measure was “a threat to the public and will face the might of the law.”

Transportation and travel came to a halt. Ebola is transmitted through bodily fluids such as spit or blood and handling infected bodies can also lead to contraction of the virus. Border control in Guinea intensified and travel restrictions increased. However, none of this could stop animals that cross borders effortlessly, carrying the virus with them. The history of Ebola in Guinea continued to rage on.

The Illusion of Elimination

Heavily stigmatized by society, Ebola victims would often hide their illness and continue to interact with society. With an incubation period of up to three weeks, it is impossible to test positive for Ebola until symptoms show. By then, it might be too late. Villages quarantined themselves out of fear.

Others doubted the very existence of Ebola. A member of the Fula ethnic group had a different explanation. “This outbreak isn’t real. How could we be having Ebola here?” he said. “President Conde made it up because he’s trying to delay elections.”

Ebola continued to spread in 2014 with no end in sight, despite educational campaigns and international health workers. In fact, the health workers contributed to the conspiracy theories. Dressed in all yellow, moving stiffly and setting up quarantined tents where loved ones entered and never returned prompted fear in the locals. Some villagers began to spread rumors that the medical workers were harvesting organs and stealing limbs. The number of people willing to enter quarantine tapered off.

Reemergence of Ebola in Guinea

In late May, the last case of Ebola in Guinea was symptom-free for 21 days. President Conde announced, “for the moment, the situation is well in hand.” International medical workers began to depart the country and communities let out sighs of relief. At that moment, the nightmare was over.

In late July, a new patient was admitted. By the end of the month, dozens more from all over Guinea. The presence of Ebola in Guinea continued and was worse than ever.

In 2014, more than 1,500 people died from Ebola in West Africa. Meliandou. This is where Ebola began in Guinea with the death of Emile Ouamouno, only to be isolated and ostracized from the national community. Surrounding villages refused to trade and vehicles were scared to enter the borders. In Meliandou, Ebola became less of a concern as people began to suffer hunger and poverty.

On December 29, 2014, Guinea was declared free of Ebola. However, Guinea was still in a state of heightened surveillance for the next three months. More than a year passed with Guinea recovering from the health emergency and mourning those who died.

In March 2016, two people in Guinea tested positive for Ebola. Fear began to creep up again in local communities. By March 22, 2016, more than 816 people in contact with the individuals had been quarantined and Liberia closed its borders with Guinea.

On April 1, 2016, an experimental vaccination was used on those with suspected contact with infected individuals. On April 5, 2016, it was reported that nine new cases of Ebola emerged in Guinea. Eight died. The WHO implemented a short incubation period and on June 1, 2016, declared Guinea free of Ebola. At last, the history of Ebola in Guinea came to a close.