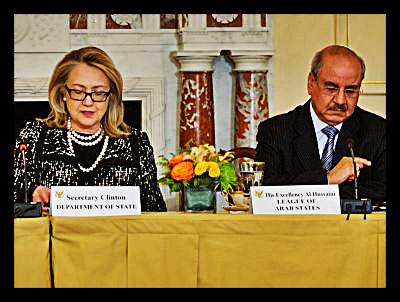 The media is constantly overflowing with updates on technological advancements and products, but their emphasis is truly reflective of the most important aspect of our changing world. Technology, as the humanitarian world has seen in the past decade or so, is not just a luxury for consumers in the first world. In fact, perhaps the greatest use of technology has been in developing countries.

Last week, the now-former Secretary of State Hillary Clinton held a small ceremony for the newest collaborative initiative coming out of the Department of State called “The Open Book Project”. Along with the Arab League Educational, Cultural and Scientific Organization (ALECSO), MIT, Rice University, and the non-profit Creative Commons, among other educational organizations, The Open Book Project strives to extend open educational resources (OERs) to the Arab world in their native language.

While many countries are familiar with OERs, which allow free access to non-commercial users to legally license material for educational or research purposes, translating American textbooks and materials into Arabic is a huge step towards providing much-needed information in an area that does not have adequate access to the best universities or schools.

Websites such as KhanAcademy.org or Coursera.org are priceless tools for young children and adults alike who want to learn more or further their knowledge. In the Arab world, where education can be limited by wealth, geography or gender, The Open Book Project hopes to break these boundaries. This is much more than a technological program; it can and should be seen as an example of “educational diplomacy”. It is a promising relationship between the United States and the Arab League as they come together on the issue of improving the opportunities for young people around the world.

Ambassador Mohammed Al Hussaini Al Sharif, the Arab League’s envoy to the U.S., sees The Open Book Project as “a huge step forward in the Arab-American relations”. By presenting themselves as supporters of increasing education and access to such resources, not only will the United States be improving its public image but more importantly, it is making huge strides in terms of addressing the many issues surrounding global poverty. Education is the main key to achieving success no matter what country someone lives in. By opening up this portal to documents, textbooks, lectures, research and other types of media, The Open Book Project will help people around the world to become productive and active members within their own communities.

What is Crowdfunding? Agroforestry Against Poverty
Scroll to top