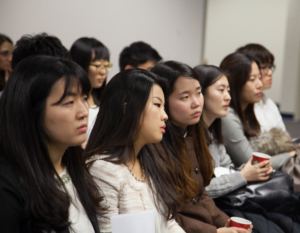 South Korea has some of the highest education rates out of all the nations in the developed world; however, the distortion in their public higher education system has created a massive trap in unemployment for many young South Koreans straight out of college. Over the past three years, the South Korean government has made vital reforms to extend and deepen its teachings in higher education. This way, university students can reap all the benefits of their education, attaining financial and mental stability.

South Korea’s occupational and economic market is ruled with an iron fist by families and partners of chaebol — gigantic oliguric companies and corporations who use complete nepotistic bias when employing young South Koreans, holding grotesque control over both financial and political sectors of their society. In May of 2017, President Moon Jae-in was elected into power. He promised South Koreans that the corruption the chaebol had caused in their society was to be renounced, diminished and abandoned, leading the way for South Korea to be more equal and equitable in employment and social politics.

Moon knew the most effective way to bring a major change in the job market was to make adjustments to the higher education system to decrease favoritism and competition between universities and employers. One form of action Moon pushed was “blind hiring,” or limiting the amount of information employers could request concerning an individual’s university ranking and GPA in their initial application. This would decrease the amount of profiling and preference which has been rooted in the South Korean occupational world.

More than 80% of higher education institutions in South Korea are privately owned and have rigorous admissions, requiring students to pass a test that most individuals can pass only with a professional tutor or prior private specialty science and mathematics schooling. The three most prestigious universities in South Korea, known as SKY, are Seoul National University, Korea University and Yonsei University. These schools are the only noted educational institutions for chaebol employers. This makes it extremely difficult for individuals from low-income homes to ever attain such professions because they don’t have the funds for a private tutor or prior elite schooling to be admitted to a SKY university.

In attempts to have a more socioeconomic diverse population of students at SKY universities, in 2018, the Moon administration ordered the SKY universities to make their admissions testing far less extensive and detailed to increase the number of applicants who would be able to pass the entry exam. The current government administration also put limitations on the number of students the SKY universities could accept so that more public universities in South Korea could build their reputations on the job market. Both of the SKY initiatives placed by Moon were very innovative in disassembling the distorted educational promises of South Korean society.

The Moon administration has aimed to eliminate all elite high schools to equalize the kind of education that young South Koreans are receiving, creating a more fair college admissions process by 2025. Thirteen universities in Seoul that had more than 25% of students from elite secondary schools were evaluated to examine their admissions systems level of integrity by being impartial when admitting students.

How Education Will Repair the Job Market

President Moon has made a tremendous effort by being the first political leader to go against the ancient, corrupt societal standards in employment and hiring practices. By placing more regulations on the educational private sector, both the political and social sectors will begin to be dismantled as well, creating even more building blocks for young South Koreans to move up the socioeconomic ladder. With the inequality of private educational institutions becoming more publicized through governmental action, a more secure and bright future is developing for the classist poverty trap of South Korea.