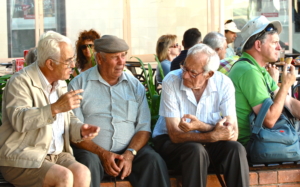 Though the eldest members of society are believed to be the wisest, they have also been revealed as the poorest and most neglected age group in the world. HelpAge USA formed in response to this travesty as a way to help the elderly claim their rights, challenge discrimination and overcome poverty.

Though many aid organizations set their sights on helping young, vulnerable children, HelpAge USA recognizes that the elderly are often just as vulnerable as the youngest members of society. HelpAge USA, therefore, works with partnering organizations to spread awareness about elderly people’s roles and value in communities.

HelpAge USA is an affiliate of the broader HelpAge international movement that builds awareness of global aging issues around the world. As a branch of this successful parent group, HelpAge USA spreads awareness of elderly rights among U.S. audiences while simultaneously urging them to advocate for the empowerment of the elderly in the developing world.

At the infrastructural level, HelpAge USA has outlined specific goals for improving communities’’ ability to help its older members, such as enabling older men and women to have secure incomes, quality health care, and support in emergency situations.

In addition to building up infrastructure, HelpAge USA works directly with the elderly to build a global and local movements that teach older men and women how to stand up for themselves in the face of discrimination. This is an important tool for the young and old alike, especially in impoverished regions with lower access to widespread employment, resources, and education.

The most innovative part of HelpAge USA is that it involves older men and women in “program design, implementation, and review.” That is, HelpAge USA relies on the input of the elderly themselves to drive the movement’s goals and ambitions. What better way to empower and properly gauge the needs of a deprived group of citizens than to place them at the heart of the movement itself?

For all they have done for their neighbors and communities, HelpAge USA believes that society owes the elderly their share of healthcare, social services, and economic and physical security in return.

In the fight against global poverty and affronts to human rights standards, one cannot forget to fight for the rights of the older men and women that have contributed so much to their communities’ social, economic and cultural development during their lives.