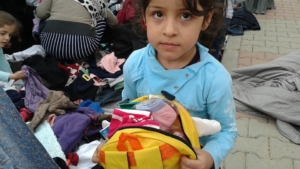 With over nine million Syrians displaced by the ongoing conflict, it is no surprise that there is a dire need for medical services in refugee camps. The situation for Syrian refugees is worsening due to a lack of international funding in the healthcare sector. According to Amnesty International, some families are becoming so desperate that they have resorted to going back to Syria to receive proper treatment.

In 2013, the United Nations initiated a $4.4 billion humanitarian appeal, one of the largest aid requests made by the organization. However, it is estimated that just over one-third of the requested funding has been received.

As more people flee to neighboring countries, including Iraq, Jordan, Lebanon and Turkey, hospital care and specialized treatment is becoming more insufficient. The healthcare of Syrian refugee children is particularly concerning, with millions at risk of becoming malnourished, dehydrated and exploited.

In Lebanon, the health system is highly privatized and expensive, thus leaving the United Nations High Commissioner for Refugees to take care of the majority of the population. With limited funds, UNHCR has implemented strict eligibility criteria in order for Syrian refugees to receive medical treatment. Even if the criteria are met, many of the refugees have to pay a portion out of pocket.

In many cases, refugees often go untreated. Arif, a 12 year-old boy who suffered from severe burns to his legs, was denied hospital access after UNHCR decided he did not qualify for subsidized care. Consequently, his health started to deteriorate as his legs swelled and became infected. Volunteer doctors were eventually found to perform his operations, but they did not have the specialized equipment to continue.

Unfortunately, Arif’s story is not unique. The healthcare of Syrian refugees has not been improving and there needs to be a push to strengthen the capacity of health institutions where the Syrian refugee population is predicted to accelerate. Patients with chronic illnesses have strained the existing health services in the affected countries and UNHCR is struggling to find solutions without international assistance.