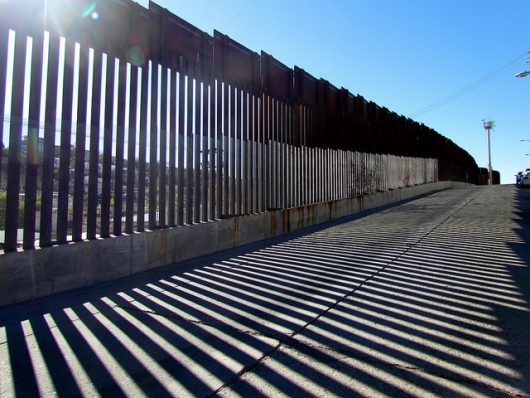 Border walls are hardly new concepts since the history of border walls stems back to the Great Wall of China and beyond. Yet, in recent years, the number of border walls has skyrocketed. Since the end of the Cold War and the fall of the Berlin Wall, over 60 border walls have either been completed or are under construction. The number has actually jumped from 15 to at least 77. That’s more than five times as many border walls today as there were 30 years ago. In understanding the border wall it is important to understand the historical context of these walls’ creations.

The ideology and causes of the Berlin Wall are fairly well known. The wall was meant to separate East from West Germany and thus became the symbol of two competing political and economic ideologies. The conflict between the Eastern Bloc countries and the USSR on one side, and capitalist Western Europe and the United States on the other became physically manifested in 155 kilometers of concrete. Yet, the Berlin Wall fell in 1989. The conflict between the USSR and the United States, as well as their political and economic ideologies, has thus subsided. Moreover, the notion of a post-Cold War, globalizing society should foster the idea that borders ought to hold less importance.

Yet, in the history of border walls, the opposite has occurred. With the Cold War over and globalization already the reality in many countries, the creation of border walls and border protection has, paradoxically, increased. This increase has been linked to new waves of migrants, particularly refugees. They are often constructed as a mean of a country’s security but ultimately serve as barriers for refugees, forcing them to travel through increasingly dangerous situations to gain access to a certain country.

The Wall Between Africa and Europe

The notion that, in the history of border walls, these barriers are meant to deter refugee migration becomes more explicit considering the location of many of these border walls.

Around the Spanish enclave of Ceuta, one of the only slivers of Europe on the continent of Africa, is a border fence between Spain and Morocco. As the last stop on the way to Europe from Africa, the border has become a major destination for refugees and asylum-seekers from war-torn and impoverished countries in Africa. The Moroccan people and government were initially unsupportive of the wall since they view the city of Ceuta and its land as rightfully Morocco’s. Yet, recently, Spain has cooperated with Morocco economically in exchange for Morocco’s police to monitor the border. This has led to numerous human rights abuses and violence, with the Moroccan police frequently raiding refugee camps and destroying the inhabitants’ belongings.

The fact that the barrier exists in Africa, on the southern border between Spain and Morocco, also serves to create the notion of a “Fortress Europe”. Europe can contradictorily want to build bridges yet creates the image of impenetrability with all of the ethnic, economic and racial factors there to unpack.

Thus, the history of border walls shows their existence often creates the veneer of security or inaccessibility but they ultimately do little to actually enhance a country’s safety or prevent illegal immigration. Moreover, while border walls serve as deterrents for refugees, migrants will continue to try and find other means of access to a country. In Ceuta, for example, refugees continue to try and climb over the fence or storm the barrier. And, in March 2014, 1,000 of those people were successful: Fortress Europe was breached.

The Wrong Message of Walls

The cost of building and maintaining border walls are very high but they are often unsuccessful in fulfilling their purpose and yield very little results.

The border wall does communicate the idea of unwelcomeness—refugees or migrants willing to risk their lives to cross into a country with a border will not feel at ease in their new home. With deportation likely being a risk for many of these people, these people tend to keep to themselves and their communities, which hampers refugee integration and creates social stratification.

Ultimately, this brief history of border walls shows that the trend of creating border walls is very ineffective mean of fostering security, mired by xenophobia and fear of refugees. Yet, the fact is that there is an ongoing refugee crisis. The solution, however, isn’t to create massive walls to tell these people that they are unwanted but to increase humanitarian aid abroad, in order to address the issues creating these refugees, while working to welcome the refugees at home.

The average cost of resettling a refugee is around $15,000. The average amount returned by refugees through taxes for a couple decades exceeds $20,000, not to mention the benefits to the market economy, the economic incentive, particularly compared to costly border walls. This suggests countries should take in, not turn away, more refugees.

The Bidi Bidi Refugee Settlement: The World’s LargestChristy Turlington: Making A Difference with Every Mother Counts
Scroll to top