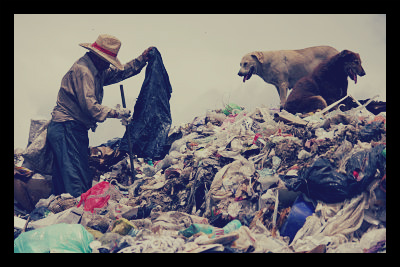 According to Vice, the “basurero”, Guatemala City’s garbage dump, is considered an official neighborhood within the city despite the humanitarian crisis it creates.

Benjamin Reeves, the author of the article, said roughly 7,000 people, including poor families, visit the site every day to look for sellable items that can potentially earn them a few extra bucks.

“Many families have been driven to the basurero by poverty brought on by the global economic crisis coupled with mismanagement on the part of the Guatemalan government,” said Reeves.

The people who live in or near the basurero are called “guajeros”. The work environment of the guajeros is often hazardous. Accidents occur frequently and the air quality makes it difficult for residents to breathe.

The most recent fire broke out in January 2014. Reeves said that the local fire department hardly put any effort in extinguishing “the inferno” that was “fueled by the chemical waste and toxic refuse” below the trash.

“Residents of the basurero complain of chronic congestion, constant headaches, and high rates of asthma and respiratory problems,” Reeves explained.

Although the basurero itself is problematic, the situation for the guajeros is not any better across the street from the mountain of trash.

The “maras”, Guatemala City’s most infamous street gangs, wield more power than NGOs within the neighborhood.

“On a good day, a guajero earns around 40 Quetzales ($5). However, the street gangs regularly extort the workers for about half of their daily earnings, often leaving them with as little as $2.50 for an entire day of back-breaking labor,” said Reeves.

Crimes such as rape, homicide, theft and child abuse are common in the basurero despite the police’s presence. Most of the time they would look the other way or hardly make any effort to maintain order and protect the residents.

While these crimes and fires continue to occur, Reeves argues that the Guatemalan media fails to report the issues related to the basurero.

Why do people live in impoverished conditions in or near Guatemala City in the first place?

According to Gretchen Kroth, a research associate at the Council on Hemispheric Affairs, the extreme poverty and economic inequality affecting the city are due to a civil war, which started in 1960 and ended in 1996.

The conflict fought between the Guatemalan National Revolutionary Unity (URNG) and Guatemalan government in rural locations “forced the migration of many families from the highlands of Guatemala to urban centers, including the neighborhoods adjacent to the landfill,” explained Kroth in a Counterpunch article regarding the education system of the basurero.

Kroth argues that the Guatemalan government today does little to support the poorly structured educational system around the country.

“As public schools are sparsely equipped due to limited government funding a corrupt management, private schools have been established to provide educational services in their place for those who can afford the fee”, she said. But the families of the children who live in the basurero cannot afford paying $20 to $60 a month for education expenses.

As Reeves explained, the guajeros can make up to $5 on a good day. Thus, how can people living in the basurero pay for an education when the money for it does not exist?

To alleviate poverty, more needs to be done in Guatemala apart from receiving the attention of the world, such as the government taking the goal of eliminating poverty seriously and learning how to manage the economy in an honest and transparent fashion.

Each day the government refuses to aid what Reeves calls “a humanitarian crisis”, the lives of the guajeros will continue to be threatened by the conditions in the basurero.