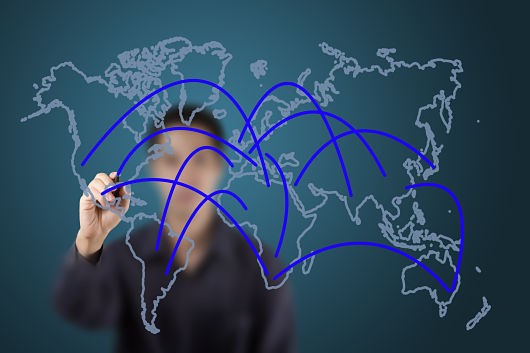 In the interest of ending poverty, much attention has been focused on trade. Trade is supposed to make everyone better off and allow people to utilize their comparative advantage, selling goods to others and buying better goods for cheaper. What this abstraction looks like in real life is a messy bundle of tariffs, quotas, free trade zones and heaps of rules and regulations. This begs the question, how is an international trade regime a public good and what should it really look like?

Borrowing a page from game theory will help us answer this question. Imagine the government of country A imposing barriers to trade on country B. Country A may do this for a number of reasons, including pressure from their domestic private sector. Their action will impose costs on exporters and manufacturers in country B, which country A has little reason to take into account. Their decision to under-value the cost of their trade barriers takes the form of an externality and results in an inefficient international trade regime.

Therefore a case can be made for an international institution aimed at easing the flow of trade between countries to make everyone better off. This would be achieved by lowering tariff barriers, increasing the predictability of tariff rates, which give exporters a clearer view of how their products can compete in the international market, and providing a platform for member countries to discuss trade-related issues and negotiate agreements. Making trade easier would make people better off.

Being a member of this institution would offer network externalities, where one user can make the good more valuable for others, whose benefits would grow with the number of members, making it desirable to have all countries participate in the trade regime.

The most prominent figure in international trade is the World Trade Organization (WTO), which is responsible for correcting the externalities and making the benefits of trade available to all.

The level of trade has dramatically increased since the introduction of the WTO, but problems have arisen as well.

The way that many of these agreements have played out have not necessarily benefited the poorest countries. One reason is that “institutional adjustments related to trade are costly.” Member nations must be compliant with WTO rules and regulations, and because these regulations are generally the norm for developed countries, the costs of implementation are borne by the countries that are less able to afford them.

For example, the United Nations uses an estimate of $150 million for a typical developing country to meet requirements in just three of several WTO agreements, “customs valuation, health and phytosanitary measures and intellectual property rights.” $150 million can be equivalent to an entire year’s development budget for some of the least developed countries. Meeting the WTO requirements implies reforming the tax structure and social safety nets to comply with the rules for intellectual property, health measures and subsidies, among others.

Should developing nations opt out of the WTO, foregoing the expensive compliance costs but also the benefits of belonging to a market-opening, trade-facilitating institution? Before answering, a look at how the WTO can fix these problems is in order.

First, a broader evaluation of the fairness of the trade regime is required. Three aspects, identified by the United Nations Industrial Development Organization, include neutrality, the net benefit for all and the maximin rule. These aspects translate to ensuring that “each country should be at least as well off with the trade regime as without it”, all members need to see a benefit from the regime and developing countries need to experience increasing benefits from the system. Retooling the WTO according to these fairness aspects would benefit developing nations and boost the effectiveness of the international trade regime overall.

In addition, financial and technical support to help developing countries meet the exacting WTO requirements is needed. The WTO has recognized its failure and is dedicating more energy to building capacity and helping developing nations meet these requirements with little cost. Recently, Germany donated a little more than $1 million dollars to a fund dedicated to this purpose.

With a number of global trade deals on the table, including the massive Trans-Pacific Partnership and Transatlantic Trade Investment Partnership, a deeper look into the workings of the international trade regime and what efforts can be levied to make it work better can have a large effect on global poverty rates.

5 Answers to Your Questions About Polio Eradication in NigeriaNew Study Finds 1.6 Billion in Multidimensional Poverty
Scroll to top