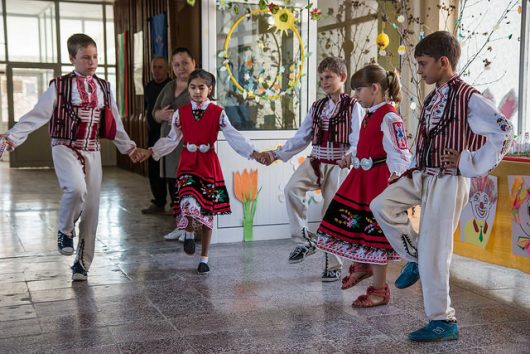 Girls’ education in Bulgaria is severely lacking in Roma communities, in part due to poor socioeconomic conditions and also as a result of the communities’ social norms. Many Roma children live below the poverty line which creates barriers to achievements in education, even barring some children from finishing primary school.

The Current Situation in Bulgaria

Often families cannot keep up with the costs of schooling. Boys will leave school for work to support the family and girls will stay home to care for children and chores. Women also abandon education because of early marriage or pregnancy.

The majority of the annual 45,000 student dropouts in Bulgaria are of Roma ethnicity. An estimated 130,000 children do not attend school in Bulgaria—most of them are Roma—and 22 percent of the Roma population in the Bulgarian area are illiterate, with only nine percent having reached a secondary education.

Why Roma Women Get Left Behind

In the past, the Roma marriage age was lower (15-16 for girls and 17-18 for boys). However, a small but increasing trend in higher-aged marriages among the young Roma community members has begun to take hold. Now the average marriable age is 17 years for women and 18.9 for men.

The older women get married, the longer they can stay in the education system and finish primary school. Continuing school after marriage for women is almost unheard of as the traditional role of being a committed wife and mother would make further education strenuous.

Certain actions, like dropping out of school and marrying young, are seen by officials in Bulgaria as typical Roma behavior. There has been a reoccurring pattern of Roma girls ending their education around fifth grade and the municipalities do not exercise the statutes that prevent early dropouts.

According to article 36, paragraph 1 of the of the Bulgarian National Education Act, the Municipal Councils are expected to “ensure compulsory school education of children up to the age of 16,” however there is little done to enforce this. Thus, Roma girls in Bulgaria are still leaving school at an early age. There is very little action from social workers, as they see school dropout and young marriages as the cultural Roma norm.

A report from UNICEF suggests strategies that could help alleviate some of the socioeconomic problems surrounding girls’ education in Bulgaria, recommending ways of mitigating the costs of education through financial assistance that will provide free programs and food at schools. Other ways of alleviating high dropout rates are reaching out to communities in isolated areas and either building a school in those places or providing free transport to other campuses.

While financial issues are prominent, social discrimination is another main contribution to dropout rates. UNICEF’s report also provides strategies that may ease the discrimination against and segregation of Roma citizens: providing national and local monitoring to ensure each child is included and progressing through the educational system. Investing in early education could also provide an opportunity for education to people who otherwise would not have had the chance.

The trending increase in marrying age is a good sign, but unless Bulgarian officials come forward to enforce primary education for all, the drop out rate will continue to disproportionately affect young Roma women. With further effort, opportunities to better girls’ education in Bulgaria, especially among Roma communities, will continue to arise.