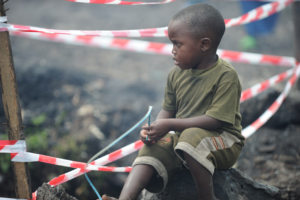 Fragility, conflict and violence (FCV) threaten to crumble hard-won development achievements in developing countries around the world. The World Bank is transitioning to an FCV strategy that can help maintain development progress amidst conflict through prevention, engagement, transitional assistance and mitigation techniques.

Effects of FCV on Development

Situations of FCV have risen significantly in the past 30 years. The number has grown from approximately 40 million forcibly displaced people worldwide in 1990 to more than 79.5 million people at the end of 2019. FCV has devastated countries’ economies and left millions in poverty, while threatening to crumble hard-won development achievements. A World Bank report predicted that in the next decade, two-thirds of the world’s extreme poor will reside in countries that fragility, conflict and violence plague. Economies that fragility and conflict burden often have persisting poverty rates of over 40%, while countries that stabilized in the past decade have dropped their poverty rates by more than half.

About 20% of people living in situations of FCV experience educational, financial and infrastructure losses. Human capital development, a pivotal component of economic growth and poverty reduction also tend to decrease in conflict settings, as the health, education and skills of an entire population get put on hold. Human capital losses from fragility and conflict can decrease lifetime productivity and earnings. As a result, it leaves the youth population at a disadvantage even conflicts end.

Aid to situations of fragility, conflict and violence has traditionally focused on humanitarian interventions to save lives and fulfill basic needs, putting development planning aside until the restoration of peace. Although short-term humanitarian aid is crucial, situations of conflict have become increasingly protracted. This dilemma has stretched the operational capacity of U.N. agencies and non-governmental organizations (NGOs), designed to provide short-term humanitarian assistance. However, the need for long-term solutions is crucial. The World Bank has concluded that securing peace is mandatory for extreme poverty eradication, and is rethinking the way it approaches development in settings of FCV as a result. In a five-year strategy, the Bank aims to assist countries before, during and after situations of FCV through four pillars of engagement.

The World Bank’s new strategy is redefining the way to approach development in situations of fragility, conflict and violence. Through prevention, engagement, transitional assistance and mitigation, The World Bank is helping FCV communities prepare for a more peaceful and prosperous future.