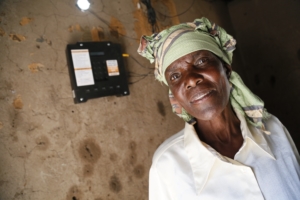 Today, 70 percent of Africans and 95 percent of those living in rural areas do not have access to electricity. Although many countries are still lacking access to electricity, there are some inspiring leaders making a difference in establishing electricity in Africa.  Particularly, George Mtemahanji has spearheaded the movement towards implementing solar energy in Tanzania.

Mtemahanji was born in Ifakara, a Tanzanian village located in the Kilombero District of Morogoro Region. In his village, poverty rates are very high and education completion rates are very low. As a young adult, Mtemahanji was able to pursue his education in Italy. Mtemahanji’s passion for clean energy grew throughout high school and technical college, where he studied to become a renewable energy technician. Upon graduation in 2012 from IPSIA Ferrari, Manuel Rolando and Mtemahanji co-founded SunSweet Solar Ltd. The company designs and installs Solar Hybrid Microgrid Systems that supply electricity to rural communities in Africa, and more specifically, in Tanzania.

Connecting rural areas to the power grid is an expensive process. However, solar energy has the ability to cut these high costs in the long-term. SunSweet allows customers to purchase energy via mobile phones, expanding energy access to schools and hospitals. Families who live in rural areas can also connect to power easily for a mere 15 cents per day. As of 2016, the technology has been implemented throughout six villages and provides energy to about 25,000 people.

One system, the Eco-Friendly Village Solar system, can meet the energy demands of a village 24 hours a day. This system is durable, where it can roughly last 20 years before needing to be replaced. Additionally, there are systems in place to help communities avoid electrical blackouts. This is especially meant for villages that are not connected to the national electrical grid (off-grid).

With the collaboration of the Kilombero District Council, SunSweet has designed a solar photovoltaic system that has the capacity to satisfy the energy demand of an entire medical dispensary. Further, the system will provide energy each day for more than 25 years.

Called the RuDEK (Rural Dispensary Energy Kit), this kit has the ability to store energy for emergency dispensaries in less than three hours. First installed in 2016, the system stores additional energy for rainy seasons and cloudy days. By supporting dispensaries, more people will receive high-quality health services. Some of the direct benefits include women giving birth with more than candlelight, vaccination and medication storage in a refrigerator, and doctors having clear visuals of ailments.

SunSweet’s first major contract was installing a solar power plant at the Benignis Girls Secondary School. The system aimed to support 236 lights, dozens of computers and fans in a majority of the classrooms. Though this was logistically challenging, SunSweet was successful in the project. With the installation of the solar power plant, students’ testing performance increased from 81 to 94 percent.

Looking Forward to a Bright Future

Two years after the company’s inception, SunSweet Solar was nominated for the prestigious Anzisha Prize, an award for young entrepreneurs in Africa. The exposure given to the company has attracted many opportunities that will support energy development throughout Africa. Further, support from Denmark, Brazil and Sweden will launch the company to take on greater projects.

Mtehamanji has since spoken with the Tanzania private sector foundation, the Tanzania investment center, the Tanzanian rural electrification agency, and many others to implement sustainable energy. With an official FuturaSun partnership, an Italian company, and a contract for a future partnership with Trine, a Swedish company, the future of SunSweet Solar looks as bright as ever.