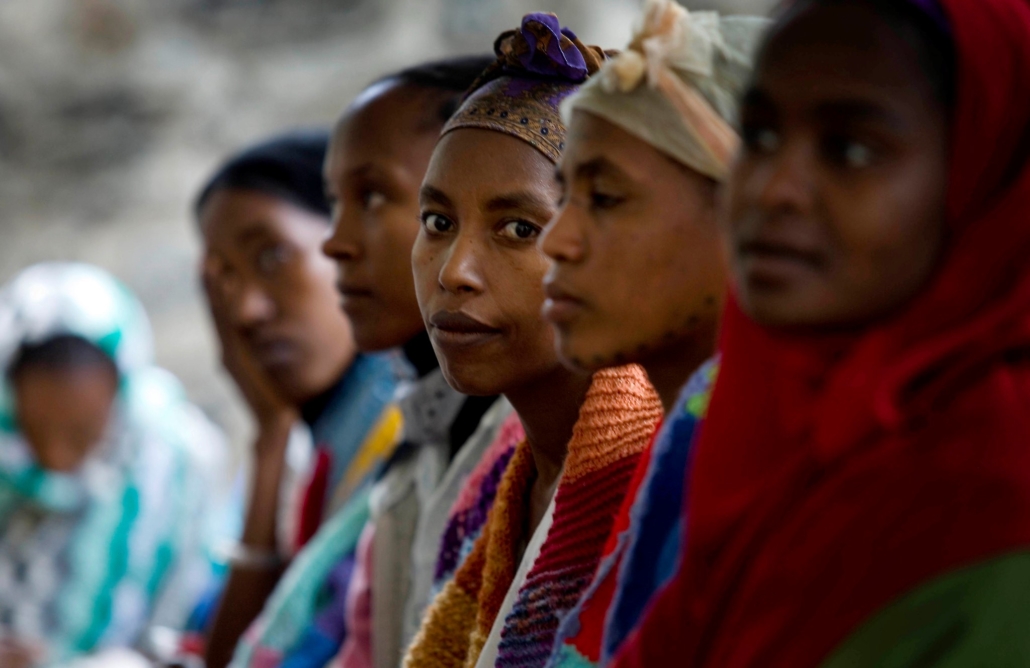 In eastern Africa, NGOs are beginning to reverse public opinion on a bloody ritual. Female genital mutilation (FGM), a practice involving the non-medical removal of external female genitalia, is a procedure that roughly 200 million women have undergone worldwide. While the cultural premise for FGM varies depending on the region, the practice stems from broader themes of repressing the female sexuality prevalent in eastern African society. Women experience female genital mutilation in Ethiopia for marital or religious reasons, and the societal precedent for FGM threatens young women with public shame and ostracization if they refuse the operation.

Female genital mutilation usually involves the complete or partial removal of the clitoris, although the procedure varies in scope and can also include the removal of the labia minora or the closure of parts of the vaginal opening. This physical trauma can result in life-threatening infections and long term problems with menstruation and infertility. Additionally, the permanent disfigurement that FGM causes may instigate depression and low self-esteem.

The United Nations classified FGM as a priority of its Sustainable Development Goals (SDGs) in 2015, but the practice is still a problem in countries such as Ethiopia, where according to a 2016 study, 65% of women and 47% of girls between the ages of 15 and 19 have undergone the procedure. The Ethiopian government banned FGM in 2005, but the criminalization of the ritual has done little to change public support for it. This is due in part to the fact that in Ethiopia, areas that are rural and lack public education resources include the highest prevalence of female genital mutilation in Ethiopia. In these areas, traditional healers usually perform the operation rather than licensed medical practitioners, meaning that legal threats hold less weight than they do in formal medical settings.

One organization, however, is having a profound effect on reversing the prevalence of FGM in Ethiopia. Kembatti Mentti Gezimma-Tope (KMG), is an Ethiopian NGO dedicated to raising public awareness on the harmful effects of female genital mutilation in the region of Kembatta Tembaro. One can translate KMG’s name to “Kembatta Women Standing Together,” and in the 22 years since it began its work, it has reduced public approval of FGM in Kembatta Tembaro from 97% in 1997 to less than 5% today.

KMG employs several strategies to combat public support for FGM, including public education campaigns to uphold women’s human rights and build trust with local communities. It also mobilizes public pressure against FGM, with public weddings for uncircumcised women (who traditionally others would consider ineligible for marriage). Additionally, trained advocates spread throughout the region who inform men of the health risks FGM poses to women and their ability to give birth.

In the Afar region, Rohi Wedu, another NGO focused on public education is having an impact. Pastoral clans characterize the Afar region, of which the majority of the population is Muslim. Rohi Wedu’s campaign to end female genital mutilation has necessarily tailored itself to the dynamics of information sharing between different clans in the area. The organization worked in conjunction with UNICEF to select leaders and prominent figures from different clans to lead “Community Dialogue” sessions, who then learned to understand the harmful effects of FGM. These trusted community leaders then went on to disseminate the information to their respective clans, as well as to provide counseling to young and prospective parents.

Rohi Wedu’s locally-led education campaigns were incredibly successful, with up to 94% of focus group participants believing that practitioners in their area had abandoned FGM. The organization’s success was largely due to the fact that religious leaders led community dialogue sessions, which eliminated the religious precedent for FGM in the Afari clans.

The work that NGOs like Rohi Wedu and KMG are doing is proof of the efficacy of locally-led public awareness campaigns in combating the practice of female genital mutilation in Ethiopia. While millions of young women still experience cutting each year, the cultural shifts taking place in Ethiopia demonstrate that long term change is possible when it happens in accordance with local communities.

MamaOpe: Child Pneumonia in sub-Saharan Africa The Benefits of Aquaculture for Poverty Reduction
Scroll to top