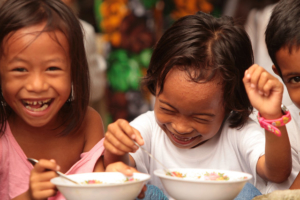 Poverty in the Philippines is almost overwhelming, and certainly so by U.S. standards. The Asian Development Bank believes that roughly a sixth of the population lived below the national poverty line in 2018, while 2.9% of Filipinos lived below the international poverty line of $1.90. Poverty directly impacts food security. About 13% of the people are undernourished, with stunting affecting around 30% of young children.

The Need for Engagement

The Helton family similarly has a history with the Philippines. Helton lived there for two years as a child and has traveled back to the country several times throughout his life. After one recent trip, he noted the need for engagement. We “have to do more than wait for them to ask us” for help, he told The Borgen Project. The Filipino people “can be in dire need and still not ask you,” since their culture frowns on asking for outside assistance. He said this creates a cycle of harm, where their economic positions and health decline, and yet they refrain from asking for help.

Help from Encompass: Reaching the Philippines

In light of this, Helton founded Encompass: Reaching the Philippines to find and meet community needs. It currently operates a feeding program for children in two locations, feeding about 60 kids weekly. Helton has also helped out individual families with food, dental and medical supplies, including a full-body wheelchair for a 21-year-old suffering from cerebral palsy. His family can now take him to the beach or to church without difficulty.

Encompass also helped a family of four with the capital costs of starting a pig farm. Helton informed The Borgen Project of the success of the pig farm. Despite a virus killing a few of the animals, about a year after its inception the operation is almost self-sufficient. COVID-19 delayed its self-sufficiency, but Helton is confident it will meet that goal in the near future. This farm, he said, would provide revenue to the family and the community at large. Interestingly, manure is the farm’s most lucrative product, as locals buy it for fertilizer.

The Emotional Impact of Poverty

Commenting on the emotional impacts of poverty, Helton told the story of a family trying to send their daughters to college. As college loans are not readily available and the several hundred dollar tuition was not something the family could front at once, they turned to a loan shark. After their oldest daughter graduated, she took a teaching job in Hong Kong and contributed to her sister’s college fund, as the family eked out loan payments. Helton said existence in the Philippines, for many, is a day-to-day endeavor.

Encompass has plans to further its support to families and communities. Some of its funding went to buy a piece of property, on which the locals constructed a community center and may eventually build a church. The organization is looking at assisting an aquaponics startup as well.

Again noting Filipino culture, Helton said that he founded Encompass: Reaching the Philippines not because the Filipino people asked, but because some people in the U.S. noticed the need for a “proactive organization” in the country. Its efforts have certainly been proactive and will undoubtedly continue to make small-scale, definitive progress.