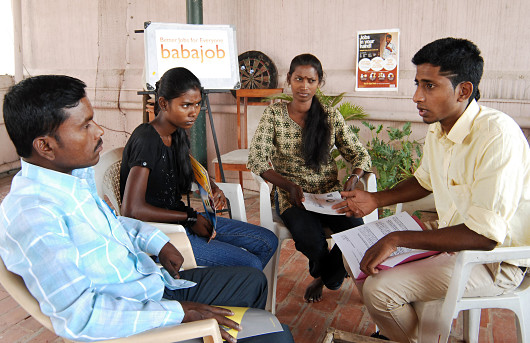 India is one of the fastest-growing economies in the world, and with that comes one of the newest and largest middle-class populations. Middle-class families in India have a want for maids, housekeepers, nannies and cooks. Most wealthy families fill these positions through word of mouth or by recommendations from friends. However, a disconnect exists between those seeking workers and those who could take on the job. Babajob is an employment website that connects millions with employers in India.

Steve Blagsvedt, who had previously worked for Microsoft in India, founded the company in 2007. He noticed that many potential employers had no way of connecting with the millions of potential employees available and vice versa. The idea was simple at first: attract employers to create an online profile, have workers do the same and then match them. Blagsvedt quickly realized, however, that while the employers had access to the site, the workers (many of whom came from India’s slums) did not. The company set up an office in Bangalore and invited potential workers. Babajob employees then filled out profiles for them, a service still being offered today. While many who live in poverty in India don’t have Internet access, nowadays, most have mobile phones. Babajob used SMS to notify applicants of interviews or if they were hired.

One issue was fixed and the service began to run smoothly, but Babajob encountered another roadblock. Much of India’s low-income population has low literacy proficiency, thus, SMS messages were ultimately ineffective. It was then that Babajob set up call centers, which are operational to this day. Applicants call in and hang up (to save money) and are then called back by Babajob staff members who provide them all the details associated with their account.

The service is revolutionary because it enables so many people, who would have never had the opportunity for work, to better their own economic situations. “It’s an amazing service for anyone in India using any phone to connect to better jobs for free, and it does so without requiring literacy in any language or an Internet connection,” Blagsvedt said.

The site currently has more than 3.9 million registered job seekers and receives thousands of new applications each month. Babajob has also expanded from solely focusing on the domestic job market to also including jobs in the nursing, banking, data science, education and engineering sectors.