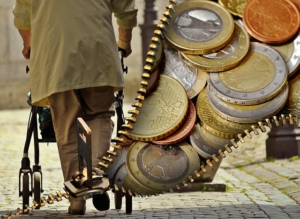 The South African government currently offers seven different types of social protection grants for its inhabitants. One of those grants is the Old-Age Pension Grant also known as the Older Person’s Grant (OPG), the only grant targeted specifically towards elderly care in South Africa. It provides a monthly income for citizens, refugees and permanent residents who are aged 60 or above with no other means of income.

The grant is allotted based on the results of a means-test, which requires the recipient to provide the government with information on their household, income and financial assets. In 2018, pensioners over the age of 60 received R1600 a month, which is around $115. Pensioners over the age of 65 received R1620, or $117 per month. The government reported that pension recipients will see a small increase in the amount received per month during the year.

Benefits of the Old Age Pension

The Old Age Pension keeps the elderly from falling into further poverty once they have surpassed their ability to provide household income. In fact, according to the International Labor Office, along with other grants, the OPG has been instrumental in the “reduction in poverty incidence among older persons from 55.6 percent in 2006 to 36.2 percent in 2011.”

Furthermore, it was even reported that female pension recipients reported better overall health within the first five years of payments than elderly females who had not yet become eligible for the grant. However, the benefits of the grant do not stop with the elderly.

Elderly people who receive the grant and live in a household with more family members are reported to share their monthly income with the rest of the house, which helps to reduce poverty for the entire household. It is estimated that one grant can reach up to six people in a household.

In addition, there is a positive correlation between employment and members living in a household where the pension is received. Women who are aged 20-30 that live in a recipient’s house are 15 percent more likely to be employed than those who do not.

Moreover, children who live in a recipient’s household are reported to have better height-for-age and weight-for-height than those who do not. Due to the HIV/AIDS epidemic, many grandparents have taken over the care of their grandchildren as their parents are suffering or have perished from related illnesses. This grant helps grandparents care for these children appropriately.

More Work to Be Done

The pension has done great things for elderly care in South Africa, but also because of its reach into multi-generational households, it has aided overall poverty and living conditions in the country. However, there is more work to be done. Only 80 percent of age-eligible inhabitants are receiving the pension. Those who are eligible but still not receiving the grant are usually males with poor socioeconomic status that live in smaller households and come from the Mozambican origin.

This lack of reception could be explained by many factors. For one, the application process for the grant requires the applicant to travel to a state application center and provide heavy documentation regarding health, income and household information. Traveling to these centers can be difficult and costly for those living in extremely rural areas.

The South African government is dedicated to aiding decrease in
poverty levels and creating a better standard of living for its inhabitants, but many older individuals still hold distrust of the government from the apartheid regime. Elderly care in South Africa has benefitted exponentially from this grant, and though it is a means-tested pension right now, the government hopes to make it universal in the future.