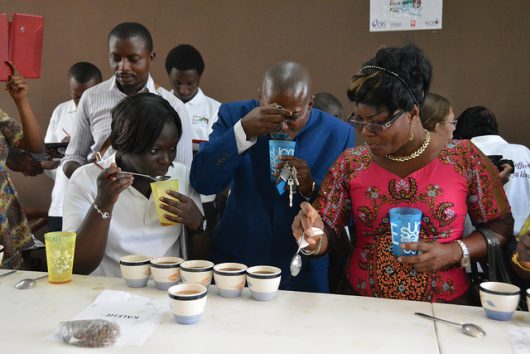 Described by a coffee specialist as “light and lively with a nice orange citrus acidity that comes in with a cocoa nuance in the mouthfeel and a little bit of a sweet spice note, ” last year’s Starbucks Reserve® Eastern Congo Lake Kivu coffee represents the remarkable – and delectable – success that the Eastern Congo Initiative (ECI) has achieved through advocacy efforts for coffee farmers in the Eastern Congo.

Founded in 2010 by Ben Affleck, the ECI works with and for the Congolese people towards rebuilding their lives and livelihoods in the aftermath of civil war, through advocacy and grant-making. ECI’s successes and partnerships illustrate the incredible efficacy of advocacy in the Congo. The initiative’s efforts to “raise public awareness about the tremendous need and opportunity in the region through highly targeted media and advocacy activities” caught the eye of the coffee industry giant Starbucks, which developed a partnership with ECI and began purchasing coffee from growers in the Eastern Congo in 2014.

Prior to the Rwandan Genocide and the subsequent Congolese Civil war, the Lake Kivu region in the Congo was a hotspot for the production of some of the highest quality coffees in the world. Decades of violence, however, decimated the industry. Unable to reach the international market upon which they had once thrived, it is estimated that about one 1,000 Congolese coffee farmers drowned per year while attempting to smuggle their crop across the rough waters of Lake Kivu and into Rwanda during the height of the violence.

The coffee purchased from the Congo by Starbucks has helped transform lives for more than 4,500 smallholder farmers and their families along Lake Kivu. These farmers’ incomes have more than tripled, which has enabled them to send their children to school and access healthcare.

Starbucks’ partnership with ECI has focused on helping Congolese coffee farmers develop sustainable agricultural production and restore the Congo as a key source of high-quality coffee, which is the key to the farmers’ improved profits. The mountainous topography and moist climate of the Lake Kivu region are ideal for growing high-quality coffee. The crop is almost entirely comprised of well-established local variants of the great heirloom Bourbon variety of Coffea arabica, which is known for its complex and engaging aromatics and flavor.

Starbucks provides Congolese farmers with the knowledge and resources to capitalize on these inherently excellent coffee-growing conditions. The endeavor has proven extremely successful, as is evidenced by Starbucks’ use of the crop as a Reserve roast and the wider coffee community’s increased interest in coffees originating from the Congo.

How to Help People in Samoa3.2 Million Face Extreme Hunger in Somalia
Scroll to top