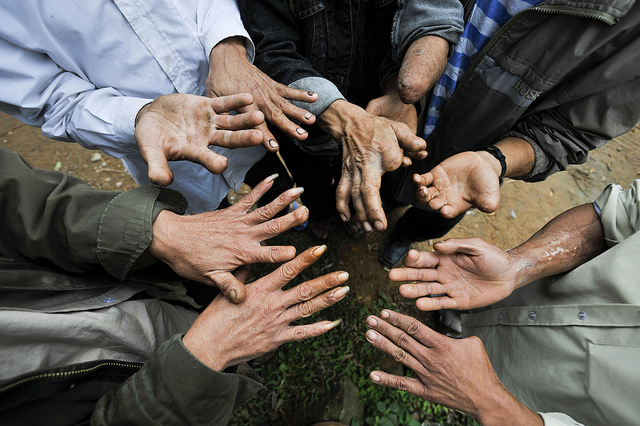 Cluster bombs contain hundreds of submunitions that can saturate an area up to the size of several football fields. Groups utilize cluster bombs to maximize destruction impact and exert the least effort possible. These particular weapons are indiscriminate, meaning anyone within range of the bomb’s detonation —whether civilian, military or terrorist— can be injured or killed as one of the effects of cluster bombs.

More than 98 percent of known cluster bomb victims are innocent civilians, and 40 percent of these are children. Cluster bombs are most prevalent in poor countries because these areas tend to be high in crime, corruption and war. These weapons undergo the following process that may result in detonation:

A cluster munition is dropped from a plane and can fly around nine miles before releasing its submunitions. This ability makes for highly inaccurate targeting, meaning the bombs are a disproportionate hazard to civilians.

The container begins to spin a short time before releasing its submunitions. It opens at an altitude between 330 and 3,300 feet. The cluster munition’s height, rotation speed and velocity determine how large of an area will be impacted.

Submunitions deploy parachutes as they descend. The parachute ensures that each submunition is stable and descends with its nose down. Each submunition is about the size of a soda can and made of a copper cone containing over 300 steel fragments and incendiary material. The cone can pierce through seven inches of armor and its contents are designed to burn the targeted area and destroy its inhabitants.

Depending on altitude and wind speed, a cluster bomb’s submunition strikes can cover an area up to 861,120 square feet. The detonation of a single submunition can cause fatalities in a 65-foot radius and injure anyone within a 328-foot radius.

Cluster bombs lack consistency; they are prone to external factors such as weather and deployment tactics. Their volatility renders it near impossible to predict the exact size of an area affected. The effects of cluster bombs usually include numerous civilian and child deaths because of the bomb’s unpredictability.

Many submunitions fail to detonate on impact, resulting in the scattering of explosive “duds” throughout the targeted area. Duds contaminate the area even after conflict ends, essentially becoming landmines that injure and kill civilians. The percentage of unexploded submunitions from older canisters can be as high as 30 percent, but modern canisters typically range from two to 20 percent.

Currently, 63 countries are stockpiling submunitions and this number continues to grow. Cheaper variations of the bombs are likely to be used by countries that brutalize their own civilians or by violent no-state agents that disregard civilian safety.

It is possible to combat the effects of cluster bombs by supporting the clearance of unexploded bombs and encouraging countries to sign the treaty banning cluster munitions. With continued effort, civilians’ and children’s lives can be spared.