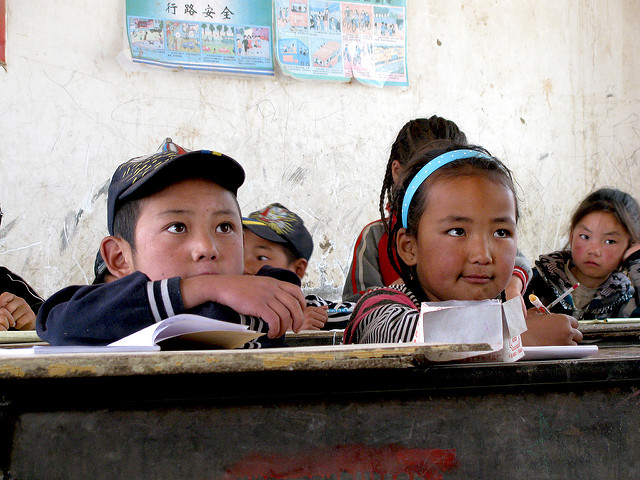 Since the seventeen-point agreement was signed for the incorporation of Tibet into the People’s Republic of China in 1951, achievements have taken place in Tibet over the past 65 years. The illiteracy rate in Tibet was reduced from a staggering 95 percent in the 1950s to 42 percent in 2000. This is according to the latest statistical data from the Department of Education in the Tibet Autonomous Region.

The education of ethnic Tibetans is subsidized by the central government in People’s Republic of China. In the Tibet Autonomous Region, compulsory education in primary and secondary schools is executed in which the average educational period for individuals is 8.6 years, while preferential policies encourage young Tibetans to seek higher and more advanced education in and out of the autonomous region.

The distinguished achievements of education in the Tibet Autonomous Region of China comprises of several aspects. Kindergarten and preliminary schools are fast developing where the attendance of kids aged three to six had reached 52 percent until the end of 2013. Besides the great results from compulsory education in Tibet, education in high schools has been expanding and the scales of schools are continuously enlarging. The fast-development of high school education in Tibet is highly reliable on scientific planning, rational mapping, and have an active construction of education funds and reasonable allocations of teaching resources.

The autonomous regional government in Tibet also takes high concerns on sharing equal opportunities to children with disabilities, where schools with special support are given priority to these kids. In addition, the policy of covering all expenses on study and accommodations for children of herdsmen in Tibet are gradually improving while related treatments are continuously being enhanced since 1985.

However, despite the brilliant accomplishment of educational development in Tibet, due to various external difficulties and constraints, some apparent problems and barriers still exist and can be enumerated as follows:

First, the natural conditions in Tibet are harsh and this results in higher educational costs. Tibet is located in the roof of the world, with wide areas and sparse populations. It lacks oxygen in the plateau where the climate varies drastically with vast temperature differences between day and night. The construction and operational costs of schools are relatively high, as the budgets for schools in rural and pastoral areas are three to five times higher than the schools in the Mainland.

Second, the economic foundation and industrial development in Tibet are quite poor. Due to the smaller levels of revenue and resources, there is generally a gap in financial and social progress in Tibet. It is quite difficult for the majority of herdsmen in Tibet to increase their incomes. Hence, with respect to such kind of fiscal status, it would be difficult for Tibet itself to allocate sufficient funds to develop education.

The third issue is related on the structural defects of training students in advanced education. It is rather hard to accumulate a large number of highly educated personnel in Tibet as for most areas, attracting and retaining talented professionals of all kinds are everlasting problems. This leads to an overall scarcity of high-end talents. Furthermore, the existing problems such as equality and quality of education, welfare towards poor families, and efficiency of education in Tibet also require intensive attention.

In early 2017, more than ten policy files were signed in Tibet on accelerating the reform and development of education in the Tibet autonomous region. These official documents clarified the tasks, policies and measures for the specific tasks on Tibet’s education progress in the 13th Five-Year Plan. Complementary education in addition to college enrolment will be prioritized for recorded poor families in Tibet. It is expected that penetration of bilingual education, as well as math and science curriculums with experimental classes will achieve 100 percent coverage in the compulsory teaching system. Technical schools in Tibet will also have to reach that goal. The five-year development plan aims to promote the healthy and rapid growth of education in Tibet.

Coming through the bottleneck and weaknesses of development, education in Tibet is improving in the current decade. Students of the next generation in Tibet are embracing a brand-new future.