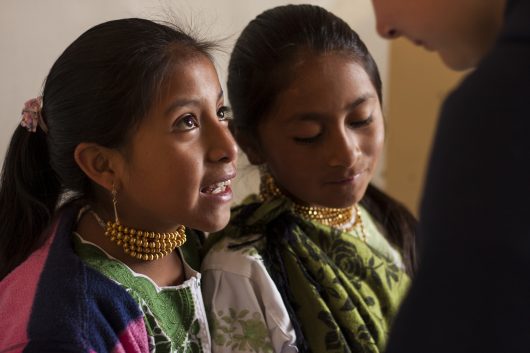 The indigenous community of many countries often becomes the most disadvantaged group of people in the country. In Latin America and the Caribbean, only about 40 percent of aboriginal children complete their secondary education.

Many indigenous children are unable to take full advantage of the education provided to them by their country because of linguistic and cultural barriers. A country’s educational system most often utilizes their national language, which disregards native languages spoken by indigenous communities. Particularly in Latin America and the Caribbean, history lessons focus on teaching history from the colonial empirical standpoint versus the perspective of the indigenous community.

By not providing the tools necessary for public education for indigenous people, they will be marginalized in the wider community. U.N. Secretary General Ban Ki-moon stated, “Indigenous peoples regularly face stigmatization of their cultural identity and lack of respect and recognition for their heritage and values, including in textbooks and other educational materials.” This creates an uncomfortable learning environment for indigenous students in schools where they are often the minority.

The lack of assistance towards the indigenous community is most evidently seen in the statistics that reveal that indigenous people represent only five percent of the global population but account for 15 percent of the world’s most impoverished according to the World Bank.

The International Work Group for Indigenous Affairs (IWGIA) reports that in Latin America alone there are about 41 million, or about 6.3 percent, of the region’s population that identify as indigenous people. Most governments in the region have chosen not to accommodate the needs of the students belonging to this demographic which explains why graduation rates are much lower compared to the national majority population.

When discussing countries like Bolivia, where 10.6 million of the population, or 62 percent, identify themselves as belonging to an indigenous community, it’s a problem that must be addressed. UNICEF stated that in Bolivia, a non-indigenous child in an urban zone belonging to the upper-middle class completes approximately 14.4 years in education, while an indigenous girl in a rural zone from a low-income family is only able to complete two years of education.

All indigenous people are at a disadvantage in Australia. Participation of indigenous 15 to 19-year-olds in higher education was 60 percent in 2013, below the 80 percent participation for all Australians in the same age group. The numbers concerning indigenous communities can be disheartening but the U.N. has called on all countries to improve the lives of 370 million indigenous people.

Although currently, indigenous communities worldwide have been marginalized, they are finally receiving the international recognition they deserve in terms of education. Experts suggest that the solution to the problem lies in providing education for indigenous people that is linguistically and culturally fitting for each community. Special attention is being given to girls and women because they are at an even greater disadvantage and possibly in more danger than their male counterparts.

The U.N. has declared a firm position on the issue concerning the report that is due to be released later this year on the education of indigenous communities worldwide. The World Bank has also shown solidarity by working actively with indigenous people worldwide on a number of issues. The topic of educating indigenous people is now part of the global education conversation.