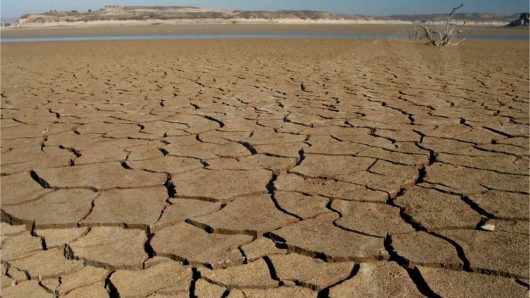 Approximately 300 people have died in the past month as a result of the deadly drought and heat wave in India. A large portion of the nation is undergoing extreme droughts and record-breaking temperatures, with the two hottest months of the year yet to ensue.

India is experiencing one of the worst water crisis it has had in years. A quarter of the population currently suffers from drought due to the failure of the past two monsoons to provide adequate water supply.

Armed guards now protect any water available from desperate farmers who constantly attempt to steal the valuable resource. As Purshotam Sirohi states, “water is more precious than gold in this area.”

Last month, authorities in India had to prohibit large gatherings at water collection sites in order to dispel the water riots. Gates were placed outside of water tankers and the police continually deal with skirmishes over the water supply.

For the past six to eight months, the poorer population has waited outside of water tankers overnight to fill up containers of water. After the water sites began to dry up, this extended to the rest of India as well.

To prevent the situation from worsening, authorities have begun to haul in trucks packed with water to provide for the citizens. However, this cannot alleviate the effect that the drought has on many citizens’ livelihood.

The farmers throughout India rely on the yearly monsoons to produce enough water to satisfy their crops, since the country lacks a highly functional irrigation system. Water shortages for the past two years have caused many farmers’ crops to dry up and the land to become far less arable for future seasons.

The drought and heat wave in India have eliminated many of the key resources that the country is largely dependent on. Those who live in the poorer areas of rural India have taken a significant hit from the rising temperatures and water crisis which has worsened the pre-existing social and economic conditions that these citizens suffer from.

A sizable portion of India’s population of poor rural workers is now migrating toward cities and populated towns to find water and to make up for their financial losses. Although many are able to find work in cities, migration leaves a lack of resources flowing from the rural areas which has a negative impact on the everyday functioning of the country.

However, this drought and heat wave in India has done more than eradicate the crops. The temperatures of over 113 degrees Fahrenheit have caused deaths across the nation. Schools have been forced to close as a result of dangerous conditions and outdoor activities have been temporarily stopped.

Though the citizens have felt the consequences of the extreme heat wave, the hottest months of May and June are still to ensue. There is hope on the horizon, though, as experts in India claim that the coming rainy season is expected to be significantly greater than those in the past.