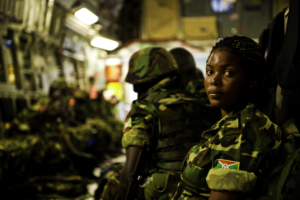 An economic crisis ravaging Sudan, Chad and other such nations of Central Africa has made the region a hotbed for protest and armed conflict. As a result, this worsens the living conditions of the citizens residing there. Recently, rising tensions in these nations have contributed to an actively worsening humanitarian crisis. Consequently, this left countless people with homelessness and food insecurity. In Sudan alone, 260,000 people face displacement and hunger due to conflicts in Port Sudan and the Red Sea State. While international relief organizations are administering humanitarian aid, a long list of challenges due to conflict in Central Africa made this process exceedingly difficult.

Crisis and Military Conflict in Sudan

Sudan has been in military conflict since a military coup removed its long-serving ruler Omar al-Bashir in April 2019. The coup removed al-Bashir as a result of austerity measures in response to an economic crisis that has been ongoing in Sudan since 2012. Austerity measures or higher subsidies on products worsened the poor quality of life of citizens living in the area. Instability within the Sudanese reached a boiling point when public protests of living conditions broke out across the country with citizens often calling for al-Bashir’s removal.

Since the April 2019 coup, a council of generals exercised executive power over the nation. However, stability has yet to return. On June 3, 2019, the government of Sudan responded to the protests with violence. The government murdered dozens of journalists and threw their bodies into the Nile. Meanwhile, the military government and armed conflict in Central Africa worsened the humanitarian conditions of the vulnerable citizenry further. Moreover, the nation remains on the United States’ “State sponsors of terrorism” list. Consequently, the nation has less access to debt relief through the United States. This means that the $50 billion debt that Sudan owes to external nations falls on the shoulders of the military government. This will affect vulnerable and impoverished citizens.

Civil unrest in Chad is the primary factor contributing to the depletion of the resources of the already economically insecure population for a number of decades. Since 1990, the Chadian population lived under the power monopoly of the Zaghawa military clan. Its leader is the long-standing president Idriss Déby. Under this military regime, the Chadian population has suffered from political violence and poor social relations due in large part to the nation’s corrupt spoils system. Likewise, poor international relations with the government of Sudan perpetuates conflict within the Chadian border, as each nation offers its support to the other nation’s rebels.

Chad suffers from resource depletion, widespread internal displacement and a high influx of foreign refugees. Protracted internal conflict in Nigeria has displaced more than 200,000 refugees to Chad, Cameroon and Niger alone. As Chad, Sudan, Niger, Nigeria and other surrounding nations participate in armed conflict in Central Africa, resources spread ever-thinner for those in the throes of poverty.

Relief and Reduction of Conflict in Central Africa

Some nations in Central Africa receive funding and foreign aid in order to relieve their populations of the life-threatening stress of resource depletion and military violence. Sudan, however, failed to meet the political requirements for such funding. Likewise, while Chad, Niger and Nigeria all receive funding, these nations are consistently underfunded by 30-40%. Providing guidance to the Sudanese government will foster peace and greater security and end the conflict in Central Africa. Funding goals should be consistent in order to resuscitate the faltering economies of the Central African region.

The Sudanese government has made a recent effort to repair social relations with its citizens. The government prioritizes education and health care as central goals of government funding. Likewise, international partners in humanitarian aid, headed by the U.N., intend to develop programs in the Central African region. This act hopes to align economic stability with improved humanitarian resilience.

Aid does exist for those struggling in Central Africa. However, armed conflict poses a continual threat to the safety and security of the population there. In order for the humanitarian situation to improve in this region, the global community must make a more dedicated effort to support peace and economic stability.