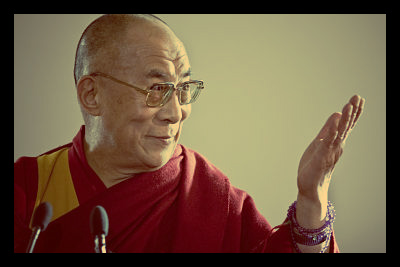 His Holiness the 14th Dalai Lama made a recent visit to Princeton University to discuss the second half of the school’s informal motto “…in the service of all nations” a motto coined by former U.S. President Woodrow Wilson. During the Dalai Lama’s talk, he centered on the idea that there is a universal need for compassion. He believes that at the center of both service and scholarship is compassion. The compass to your life, he urged, can be guided and the answers will always appear clear when “your intentions matter, develop your heart, be honest with yourself, work very hard at these things, and let them direct your efforts.” He stressed these points to Princeton University students and faculty as they were looking for ways to increase their community service in the area. The Dalai Lama believes that any action of compassion has to be preceded with an external action of service for it to be sincere and maintainable.

Compassion, the Dalai Lama pointed out, must be coupled with hard work. During his talk he recognizes that he did not easily become the 14th Dalai Lama easily. As a testament to his self-discipline, he wakes up every morning 3 a.m. and begins his rituals, including three hours of meditation. Although his rituals seem extreme, he pointed out that people should not be commanded to service, forced against their will into spiritual discipline or compassionate acts. True compassion arises from a sincere affection for the other.

Another element that he focused on was the real mover of all things is love. The Dalai Lama often says that American universities are adroit in developing the mind, but not the heart. How often do people do service work intentionally and focused on developing the capacity for love? There must be a correlation, he stressed, drawn between academic excellence and kindheartedness in order for schools to be more compassionate in their actions.

Speaking through his interpreter, the Dalai Lama said: “When we talk about human connection and compassion, the focus is the person, not their culture… the primary emotion at a basic human level is that of love; the secondary level is differences; that’s where complex emotions like jealousy and competitiveness arise.” Anything that you project outward once began and came from inward. In order to give compassion you must cultivate it within yourself. Doing community service is not robot work, it takes real thoughtful actions, care and connections. Just like Newton’s law for every action there is an equal or opposite reaction, the source of compassionate action must be love.

The Dalai Lama encouraged the students at Princeton to make the world a much more peaceful place by aligning their positive energies and having a deep commitment to service.